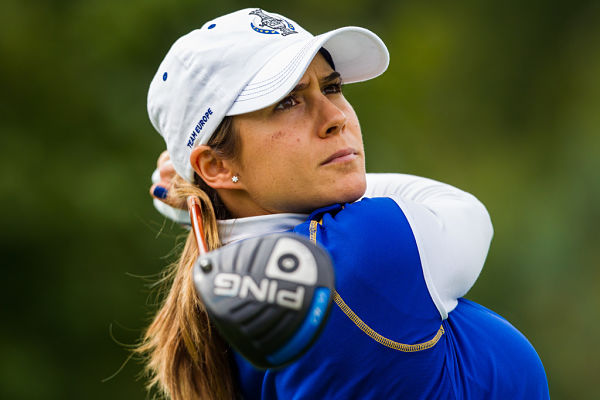 I’m writing to you on a short break. What a crazy week. This Saturday I’m getting married in Málaga and I’m extremely busy, although the one who is really doing all the work is my mom. Bless her! What would I do without her!

The wedding will be fun. For now, it’s going to be held in both English and Spanish. A little complicated. If it turns out like it has during the rehearsals, we’re going straight to the home videos. The same goes for the dance. Tim and I have been practicing, but I’m not sure how it’s going to turn out.

It’s going to be a very golf-oriented ceremony. Many Spanish golfers will attend, and players from the LGPA: Carlota Ciganda, Ai Miyazato, So Yeon Ryu, Adriana Zwanck, Sonia Cólogan, Inés Tusquests and Pernilla Lindberg, among others. The wedding is at twelve thirty in the morning and the hairstylist said he’ll be at my house at eight in the morning!! Beforehand, this evening, we’ll have dinner with all those who have come from out of town. It’ll be fun. But I have to go to bed early because of the crazy schedule.

Golf, at the moment, has come to a bit of a standby. I was training with Marcelo Prieto up until last week, but this week I haven’t even touched a club and I won’t go back to playing until after the honeymoon, on December 30th. The next blog post I write will be as a married woman. Regards to all and I’ll take the opportunity now to wish you all a Merry Christmas and a Happy New Year.

'Opendicitis' to finish off the yearAzahara Muñoz
2 March, 2021
The year came to an end with an unexpected visit to the hospital. It all started on Wednesday of last week. Suddenly, I woke up that night with a sharp pain in my stomach. Strange. I had never…
A note on the mirrorAzahara Muñoz
2 March, 2021
It’s the Thursday of the Open de España. I’m going to play in the morning session. Very early start. The first thing I do when I wake up is go toward the mirror. There’s a note. What was it?…
Controlling expectationsAzahara Muñoz
2 March, 2021
I don’t think it will come as a surprise to anyone when I say that I haven’t started the season off as I’d hoped. We’re already a third of the way through and the truth is that the results…
The craziness at the Presidents in Korea and a check-up on moraleAzahara Muñoz
2 March, 2021
Hello everyone from Malaysia. You already know that this week marks the beginning of the American tour through Asia. We’re at the end of the season and I really want to do things well. It hasn’t…