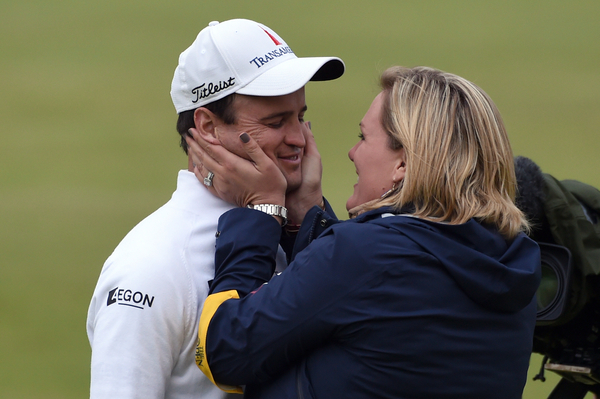 I had the opportunity to meet Zach a few years ago. It was on the day we always dedicate to the Transamerica clients, sponsor we share with Tom Watson and Kyle Stanley. He was charming from the start. He’s really open and attentive. What called my attention the most  the first day I saw him was the memory he has and the way he treats others. He remembered every detail about the clients, everything, their work, what their kids study, the university they went to…All he needed to do next was spell out their license plates. Zach is a humble person, but makes a big impression with his personality.

He treats everyone the same. It’s not selective memory. He didn’t do it to please the sponsors. He’s always that way. I’ve come across him three times now and he always remembers everything you tell him, he remembers Tim, my boyfriend, he asks me things, he follows me on Twitter, he writes me messages, he is a very attentive, nice guy.

There are things that make an impact on you and stay with you which, in my opinion, perfectly defines how he is. I was in Doral last year to see the tournament. I was in the audience, following the rounds and watching the players hit balls on the practice course. I went by Zach and it was he who approached me to say hello amidst the crowd.

It happened again in Pinehurst, when the guys played in the US Open the following week. I had just arrived to the golfers’ parking lot. I was doing my thing when suddenly, I see Zach coming from the other end of the parking lot to say hello and to ask how I was. I promise you I didn’t even see him.

He’s a talkative person, and very pleasant to talk to at that. If you ask him a question about his life or his practice methods, he goes into detail and tells you everything. He’s very humble, but at the same time is very sure of himself. But don’t get it confused for someone who is humble and and who feels less when in the presence of others. Not by a long shot.

Zach always wants to help you. When I’ve asked him questions at times about how he practices, he’ll tell you everything you need to know down to the smallest detail. That is priceless. He’s very family-oriented as well, he always talks about his kids. He tells me about how he plans his work accordingly in order to have time with his family. A great guy. Honestly, I’m really happy for him. He’s a hard worker, a good person and I’m really glad he won. Speaking of which, I’d like to take the opportunity to say, the US Open Championship was spectacular. I didn’t miss a thing in the last round. It’s a shame about Sergio in the end, but he’s there, another top ten, and fighting hard like always.

'Opendicitis' to finish off the yearAzahara Muñoz
5 March, 2021
The year came to an end with an unexpected visit to the hospital. It all started on Wednesday of last week. Suddenly, I woke up that night with a sharp pain in my stomach. Strange. I had never…
A note on the mirrorAzahara Muñoz
5 March, 2021
It’s the Thursday of the Open de España. I’m going to play in the morning session. Very early start. The first thing I do when I wake up is go toward the mirror. There’s a note. What was it?…
Controlling expectationsAzahara Muñoz
5 March, 2021
I don’t think it will come as a surprise to anyone when I say that I haven’t started the season off as I’d hoped. We’re already a third of the way through and the truth is that the results…
A foursome team for lifeAzahara Muñoz
5 March, 2021
I’m writing to you on a short break. What a crazy week. This Saturday I’m getting married in Málaga and I’m extremely busy, although the one who is really doing all the work is my mom. Bless…