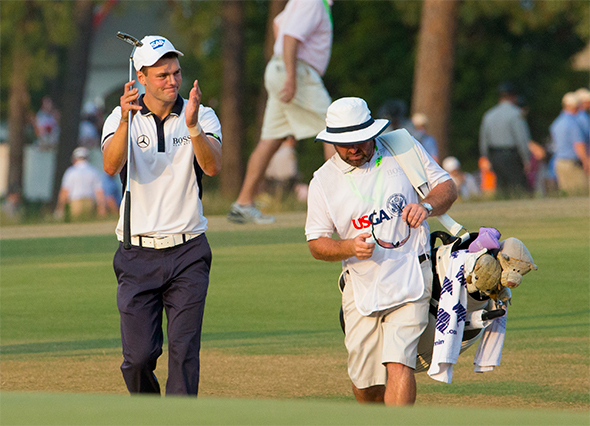 Kaymer, I met him at the Portugal Open on his first year on the European Tour. I remember we were playing with Jesus Mari Arruti.

It was a Saturday or a Sunday and he left us speechless with his game, to the point that we gave him the nickname ‘Empalator’. I have not seen anyone hit the ball like he does.

Not much to say about his status as a player. A golfer who is less than 30 years old, and has won two majors, tour events, the Race to Dubai, and made the final putt to win the Ryder … Says it all really.

He has achieved practically everything, and is one of the greatest European players. In fact, there are very few on our continent who have won two majors at his age. And what´s more he is a good person, a simple guy, humble, hardworking, very German, and I think that is always a plus.

I was a victim of his game in Loch Lomond in 2009, where he came second. I won it. He’s a player you know will not be intimidated under pressure. He has already achieved many things, so far, and I would say that the best is yet to come. He has a spectacular career ahead. I repeat, the best part is that he is simple, fantastic and normal… As my grandmother says: how hard is it to be normal.