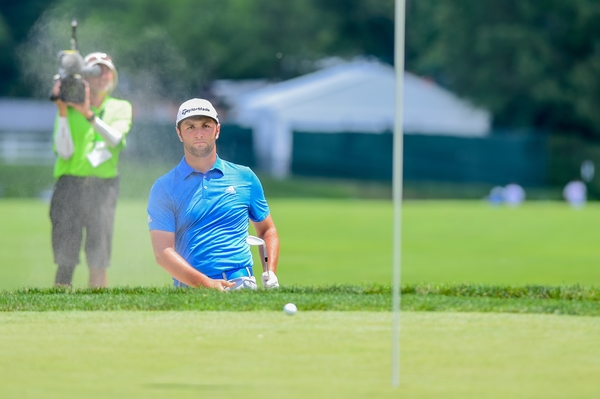 When the tournament ended and they told me that I had secured the card, I couldn’t believe it. Are you sure? One hundred percent? Make sure they’re not Canadian dollars instead of American dollars and even then it was going to be a bit… But no, no. Confirmed. US dollars and a card for next year. I’m very excited. The first sensation I had after having accomplished my goal was relief. Although I had made it a point to try not to, thinking about the card from week to week was inevitable. It was an added stress and who knows if in the end that pressure was one of the reasons I didn’t win in Canada or in Congressional. The truth is that I don’t think that’s the reason, but who knows.

To be honest, I trusted that I could do it, but I didn’t think I would get it so quickly. I have three more tournaments to play, three good tournaments and I had thought, well, with a couple top 20s here and there that maybe I could do it, but in the end it happened just as Steve said it would, my agent. I remember when we talked about the calendar and the card and he told me: “if you get a second place you’ll get unlimited invitations”, and I finished in third place in the Quicken Loans, and afterwards he told me: “with two top 3s you’d be set”. I had six tournaments and I did it in three, and I say three because the British was like a bonus that came after. I am very pleased.

Yesterday in Canada I put everything I learned into practice in Congressional in the last round of the Quicken Loans and I’m very satisfied with how I played. It was a shame that I didn’t make more putts. I still can’t explain how I didn’t land it on the 18th hole for eagle. I was totally caught by surprise because I couldn’t believe it didn’t go in. I even talked about it with other golfers and they were all equally surprised… In any case, I can’t be too hard on myself about so many things. I think I played pretty well and the only thing that happened is that there was a golfer, Jhonattan Vegas, who played better. In four tournaments I had two opportunities to win and surely the putts will start going in one day…

I played the last two holes with the one and only objective of winning. I know the money was important for the card, but I wanted to win. On the course I managed to stay focused and not to think about the rest. That’s why I shot the 5 iron I shot on the 18th. I knew I needed an eagle to tie, which is what I was after. I hit the ball perfectly. First I had a 6 iron in hand, but then I decided to hit a 5 iron and it turned out perfectly, fifteen meters to the left, strong, high, good impact, nice fade… A shame it didn’t open up a little more because it would have left the ball even closer.

I walked away with how well I played on the 18th under pressure. I handled the three shots exactly how I wanted to. And the putt… it’s hit or miss. The lob on the 16th hole was great. I got lucky with how the ball dropped. When I hit the second shot I told Ben that in that spot we were dead. However, when I got there I saw that the ball was really well placed, it was a public crossing zone and I saw that the club would come up well from underneath. I didn’t even think twice, nor do I remember how the swing was… It’s a shot I love that I practiced a lot in Larrabea. I liked trying to swipe the club from underneath the ball. As soon as I made contact I knew it was really good…

After having already reached my goal I have to sit down with my team to see if we’ll make any modifications. Nothing is concrete yet, but it’s possible that I’ll pass on one of the three tournaments left to be able to rest. I want to disconnect in order to fully prepare for the beginning of next season because the objective is to do well in the first few tournaments. That being said, as long as I don’t win any of the tournaments I have left, I could even participate in the FedEX Cup playoffs. I promise you I wouldn’t mind changing my plans last minute at all… I don’t want to end the post without thanking everyone for the messages you send me everyday. It’s wonderful to see how many people follow you and support you, most of all when things aren’t going so well and they’re always there. It’s incredible and I cannot thank you enough.

Oakmont, graduation and the Ben Hogan AwardJon Rahm
17 April, 2021
These last few days have been really intense. What a week. I almost don’t even know where to start. I’ll go in reverse chronological order, that way it’s easier. I’ll start with the last…
Knowing that my name will always be there is an incredible honor for meJon Rahm
17 April, 2021
I think I’m still smiling after Sunday’s win. And because of what’s to come. Winning the finale of the Pacific Conference, known as the PAC 12, is one of the most important titles you can…
That’s how I’m going to prepare for the US Open and my absence in the Open de EspañaJon Rahm
17 April, 2021
Change of plans for the US Open. It's now been confirmed that I'll play as an amateur, through the invitation I received from the USGA after having finished the course as Number One in the world…