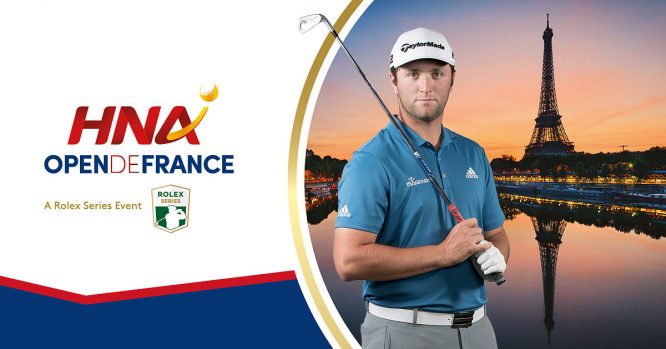 Spain’s Jon Rahm has announced he will make his debut appearance in the European Tour’s new Rolex Series in the HNA Open de France at Le Golf National from June 29-July2.

The World Number Ten will get his first look at the 2018 Ryder Cup venue when he joins World Number Eight Alex Noren, home favourite Alex Levy and Major Champions Martin Kaymer and Graeme McDowell in the field.

It will be the first time the 22 year old has played on European soil since becoming a European Tour member at the start of March and means he will play back-to-back Rolex Series events on the Race to Dubai this summer, having previously confirmed he will join host Rory McIlroy at Portstewart a week later for the Dubai Duty Free Irish Open Hosted by the Rory Foundation (July 6-9).

Tickets to see Rahm in action in the HNA Open de France are available now via opendefrance.europeantour.com.

Having only turned professional last year, former World Amateur Number One Rahm is currently third on the European Tour’s Race to Dubai Rankings Presented by Rolex after finishing tied third on his first European Tour start in the WGC-Mexico Championship before reaching the final of the WGC-Dell Technologies Match Play, where he took World Number One Dustin Johnson to last hole.

He also finished tied 27th at the Masters Tournament on his debut at Augusta National, and having won his maiden PGA Tour title in the Farmers Insurance Open in January, he is now looking forward to showing European fans why he is one of golf’s most exciting young talents on a course where he hopes to make his Ryder Cup debut in14 months time.

“I can’t wait to come back to Europe and play in front of the European fans in Paris,” said Rahm. “The HNA Open de France is one of Europe’s biggest tournaments with a great history and I’m really looking forward to being part of it. So many Spanish players have had a lot of success at this events over there years, with Seve (Ballesteros), José María (Olazábal) and Miguel (Angel Jiménez) having won the title and I’d love to add my name to that list for sure.

“It’s going to be a fun few weeks playing in France and then going on to the Irish Open. I think the European Tour is doing a great job with the Rolex Series. It’s great to be able to play such prestigious events and get my game ready before heading to The Open at Royal Birkdale.”

As well as attempting to follow in the footsteps of the aforementioned Jiménez, Olazábal and Ballesteros by winning the HNA Open de France title, Rahm is hoping to join the trio in representing Europe in the Ryder Cup against the United States.

“It’s going to be a fun few weeks playing in France and then going on to the Irish Open. I think the European Tour is doing a great job with the Rolex Series. It’s great to be able to play such prestigious events and get my game ready before heading to The Open at Royal Birkdale.”

This year marks a new era in the history of continental Europe’s oldest national Open with a new title sponsor on board in HNA Group, a global Fortune 500 company focused on tourism, logistics and financial services. The HNA Open de France begins an impressive three week run of Rolex Series events on the European Tour, followed by the Dubai Duty Free Irish Open hosted by the Rory Foundation and the Aberdeen Asset Management Scottish Open. All three have prize funds of US$ 7 million and are part of the European Tour’s Race to Dubai.

There will be an added incentive for golf fans attending the opening round of the HNA Open de France on Thursday 29 June, with one lucky spectator set to be selected at random to receive four tickets for the Friday, Saturday and Sunday sessions of The 2018 Ryder Cup at Le Golf National.

Tickets can be purchased here with concessions available for customers aged 65 and over and FFG licensees, while children under 16 are permitted free entry when accompanied by a ticket holding adult.

Official Hospitality packages are also available on the ticketing page, or alternatively contact the European Tour’s dedicated Hospitality Sales Team, who will be happy to answer any queries and discuss the various hospitality options, on enquiries@europeantourhospitality.com or +44 (0) 1344 840681.