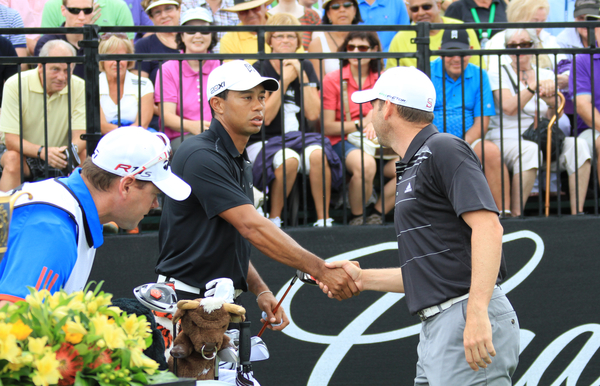 Tiger Woods played this Thursday and Friday in the game right before that of Sergio Garcia. Yesterday, in the media zone, the California native was talking in front of the lights camera and action, and a few minutes later Sergio Garcia appeared, who came to do the same. The Spanish golfer went right behind Woods, giving him an utter so slight pat on the back and told him: “Tiger, well done.”

He came back and showed his gratitude with a nod of the head. It’s a nice detail. They didn’t hug it out it, nor did they exchange handshakes, but it counts, it definitely counts. The simple gesture is better than nothing and on other occasions, in the same exact situation (because there are many times, in fact, that they come out together in consecutive games), there wasn’t even an exchange of glances. Since Woods left the scene in order to work hard on his short game, there almost hasn’t even been one week when the Spanish golfer played in the US in which they didn’t ask him about Tiger. And Sergio hasn’t shown anything but respect.

This week, the polite gestures were mutual. Woods himself said hello politely to Victor García, the Spanish golfer’s father. Mark Steinberg also, Tiger’s agent. It would be pushing it to talk about a real interaction between the two, we’re talking mere gestures of politeness here, but at least they’ve been able to break down some pretty tough barriers.