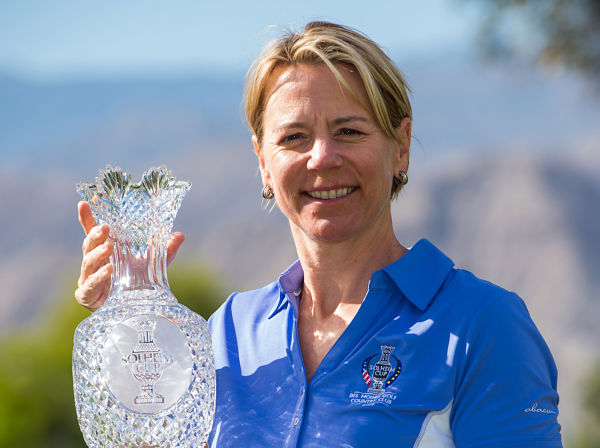 Annika Sörenstam, one of the most successful golfers in history, has been announced as the European captain for The 2017 Solheim Cup at Des Moines Golf and Country Club in Des Moines, Iowa, from August 14-20, 2017.

The eight-time Solheim Cup player, who also served as a vice captain in the last three contests, takes the reigns for the 15th Solheim Cup with the aim of leading Europe to a sixth victory in the biennial team match-play competition.

The 89-time tournament winner and 10-time major champion earned 24 points from her eight appearances as a player and holds several Solheim Cup records for Europe, including the joint most matches won on 22 with Dame Laura Davies and most points scored in foursomes competition  with 11 ½. She played on two winning sides, at Loch Lomond in 2000 and at Barsebäck in 2003 and was instrumental in two further victories as a vice captain at Killeen Castle in 2011 and in Colorado in 2013 under Alison Nicholas and Liselotte Neumann respectively.

“It’s an absolute honor to be named the 2017 European Solheim Cup team captain,” said Annika. “The Solheim Cup was a very important component of my playing career and I’ve enjoyed working as a vice captain the past three Cups to prepare for this opportunity.  The event has really grown over the last decade and we look forward to representing Europe in Des Moines, a tremendous golf market.”

“We are extremely pleased to have Annika leading our team for the next Solheim Cup match in Iowa,” said Ladies European Tour CEO Ivan Khodabakhsh. “When you think about her pedigree as the best player of our generation, her personal accomplishments and Solheim Cup experience, she has an exceptionally strong understanding of the attributes required to be an inspirational, respected and successful captain of the European Team.”

PING Chairman & CEO John Solheim commented: “Annika’s experience in the Solheim Cup and steely determination are the perfect combination to lead the European team next year at Des Moines Golf and Country Club. I’ve known her since her rookie year on Tour and watched in awe at Moon Valley Country Club as she became the only LPGA player in history to shoot 59. She’s been a role model for the game’s current stars, many of whom will now draw inspiration from her as they seek to recapture the Solheim Cup.”

Annika made her Solheim Cup debut in 1994 at the Greenbrier in West Virginia where she earned one point in the foursomes. Two years later, she amassed four points at St Pierre in Wales in 1996 and then another three in 1998 at Muirfield Village, Ohio. She contributed two points to Europe’s 14½ – 11½ victory at Loch Lomond in Scotland in 2000 and then 3½ points at Interlachen in Minneapolis in 2002.

One of her most memorable Solheim Cup performances came a year later when she contributed four points in a 17½ – 10½ victory in front of passionate Swedish galleries on home soil at Barsebäck. She went on to win four points at Crooked Stick in Indiana before making her final appearance at Halmstad in Sweden in 2007, scoring another 2½ points in European blue before stepping away from competitive play.

Annika returned to the Solheim Cup fold four years  later as a vice captain under Nicholas at Killeen Castle in Ireland when Europe defeated the United States by 15-13 for their first win in eight years. She was also a vice captain under Neumann in 2013 when Europe earned their first win in the United States with a score of 18-10 in Colorado, the eight point margin of victory being a record in the competition. She gained further experience as part of the backroom team under Koch at St. Leon-Rot in Germany in 2015, when Europe lost by 14½ – 13½, the closest score in Solheim Cup history.

She becomes the ninth European Captain following Mickey Walker, Pia Nilsson, Dale Reid, Catrin Nilsmark, Helen Alfredsson, Nicholas, Neumann and Koch.  She and her 12-woman team will work to regain the Cup from the United States next summer, when Juli Inkster returns to lead the U.S. Team.

About The Solheim Cup

The Solheim Cup combines the tradition and prestige of the game of golf with passion for one’s country and continent. This biennial, trans-Atlantic team match-play competition features the best U.S.-born players from the Ladies Professional Golf Association (LPGA) Tour and the best European members from the Ladies European Tour (LET).

The Solheim Cup is named in honor of Karsten and Louise Solheim of Karsten Manufacturing Corporation, parent company of PING. In 1990, the Solheim family, in conjunction with the LPGA and the LET, developed the concept and became the sponsor for The Solheim Cup, professional golf’s international match-play competition for women. Held every two years, the event has grown into the most prestigious international women’s professional golf team event. The Solheim Cup is the most highly coveted trophy in women’s profes­sional golf team competition; some of the most memorable moments in women’s golf have happened during Solheim Cups, and berths on the U.S. and European teams are highly coveted by players from both organisations.

The 2017 Solheim Cup will be held at Des Moines Golf & Country Club in West Des Moines, Iowa.  Team USA enters the competition holding the Cup after an historic and dramatic come-from-behind victory in Germany. They will look to defend its home turf after suffering their first ever home loss on American soil in 2013 at Colorado Golf Club. The American squad holds a 9-5 lead in the series, which began in 1990.

Global Partners for the event are PING, Rolex and DuPont. For more information about The Solheim Cup and updated standings for each team, log on towww.solheimcup.com and www.lpga.com and follow on Twitter (@Solheim_Cup) and Instagram (@solheim_cup).

Des Moines Golf and Country Club was founded in 1897, but has resided in four different locations.  Since 1966, the Club has occupied 475 acres on the western edge of West Des Moines.  It is the leading full-service country club in Des Moines and is among the most innovative clubs in the Midwest.  Both 18-hole courses are original Pete Dye designs and consistently appear in the top 10 Golf Digest state rankings.  In 1999, the Club hosted the record setting Twentieth United States Senior Open Championship on a composite of the two courses.  The same routing will be used for the 2017 Solheim Cup.

About the Ladies European Tour

With 315 world-class players from 42 different countries who inspire fans at more than 20 golf tournaments on five continents, the Ladies European Tour is truly global and showcases each country it visits to a global audience, driving inbound tourism with increased television coverage and live broadcasts. At each event, it’s not just about the swing – it’s about a day that goes with a swing. A big day out with fun entertainment and a festival atmosphere set in beautiful scenery.  We aim to captivate and excite, but we don’t just appear and leave – we aim to create a legacy. We are ‘more than just a Golf Tour.” With the Olympic Games on the horizon, the Tour has taken on special significance for players from a multitude of countries who aim to qualify when golf returns to the programme this summer after a 112-year absence. Follow us on Twitter @LETgolf, Facebook, Instagram, YouTube and at http://www.ladieseuropeantour.com.

Annika is the greatest female golfer of our generation, and often regarded as the best of all-time.  During her 15 year Hall of Fame career, she rewrote the LPGA and Ladies European Tour record books, won countless awards, and changed the way women’s golf was played, viewed, and covered.  She amassed 89 worldwide victories, including 72 on the LPGA, ten of which are Major Championships.  She has a record eight Rolex Player of the Year awards, holds the record for the lowest scoring average in a season (68.69 in 2004), and three of the lowest four of all-time. She has a record six Vare Trophies for the year’s lowest scoring average of the year. She represented Europe in eight Solheim Cups. She is the only female to break 60 in an official event, which garnered her the nickname, “Ms. 59.”  Annika was the first and only female to cross the $20 Million mark for LPGA career earnings and her total of over $22 million is nearly $3 Million more than the next closest competitor despite not competing since the 2008 season. Annika was the recipient of the Patty Berg award in 2003 for her contributions to women’s golf. She was the Associated Press Female Athlete of the Year from 2003-2005, and the Golf Writers Association of America Female Athlete of the Year in 1995, 1997, and from 2000-2005.

Annika stepped away from professional golf after the 2008 season to focus on her family and the ANNIKA brand of businesses, including the ANNIKA Academy, ANNIKA Course Design, and the ANNIKA Collection of apparel with Cutter & Buck. ANNIKA Course Design has completed three courses globally: the ANNIKA Course at Mission Hills Golf Club in Shenzhen, China; Euphoria Golf Estate & Hydro in the Waterberg region of South Africa’s Limpopo Province; and Golden Bay Golf Resort in TaeAn, South Korea. Annika’s credits also include The 27 Club in Tianjin, China where each hole is designed by a different major champion; Estonian Golf & Country Club in Tallinn, Estonia, which will be her first design in Europe; and Olivion in Belek, Turkey, which is slated to follow.

In 2007, Annika created the ANNIKA Foundation as a way to teach children the importance of living a healthy, active lifestyle through fitness and nutrition, and offer aspiring junior golfers opportunities to pursue their dreams. The Foundation has partnered with key organisations to promote healthy, active lifestyles for children, including SPARK, Florida Hospital for Children in support of its Healthy 100 Kids initiative and The First Tee in development of the Nine Healthy Habits curriculum for children. The Foundation annually conducts five major golf events for aspiring junior girls, including an award-winning AJGA tournament, ANNIKA Invitational at Reunion Resort in Orlando, Fla.; the ANNIKA Invitational at Mission Hills, the first all-girls junior tournament in China; the ANNIKA Invitational in Europe; and the ANNIKA Cup, a team event for the top juniors in Sweden. In 2016 in partnership with the R&A, the Foundation will conduct the ANNIKA Invitational Latin America in Argentina With the support of 3M, the Haskins Commission and Golfweek, in 2014 the Foundation created the ANNIKA Award Presented By 3M, which is given annually to the best collegiate female golfer. In concert with the award, the Foundation launched the ANNIKA Intercollegiate Presented By 3M, a college tournament featuring 12 of the top Division I schools, held annually on the Watson Course at Reunion Resort.

In 2008, Annika joined Arnold Palmer as only the second Ambassador of the United States Golf Association, and in 2009, along with Jack Nicklaus, she was named a Global Ambassador by the International Golf Federation and aided in the successful bid for golf in the 2016 Olympic Games.  In 2011 Annika was named the winner of the USGA’s prestigious Bob Jones Award, given annually to someone with distinct character on and off the course. In 2013, she was named the First Lady of Golf by the PGA of America. Annika served as a vice-captain for the victorious 2011 and 2013 European Solheim Cup Teams in Ireland and the United States, as well as the 2015 team in Germany.  Annika also appears regularly as an Analyst for NBC Golf’s broadcast of LPGA Major Championships. In 2015, Annika was named the top female athlete of all-time in her home country of Sweden.

In addition to expanding her brand and growing the game, Annika and her husband Mike McGee have two children, Ava (9/1/09) and Will (3/21/11). Annika represents world class companies that include 3M, AHEAD, Callaway, Cutter & Buck, Golfing World, Lexus, Pacific Links International and Rolex. Annika’s Twitter handle is @Annika59 and more information can be found at www.annikasorenstam.com.