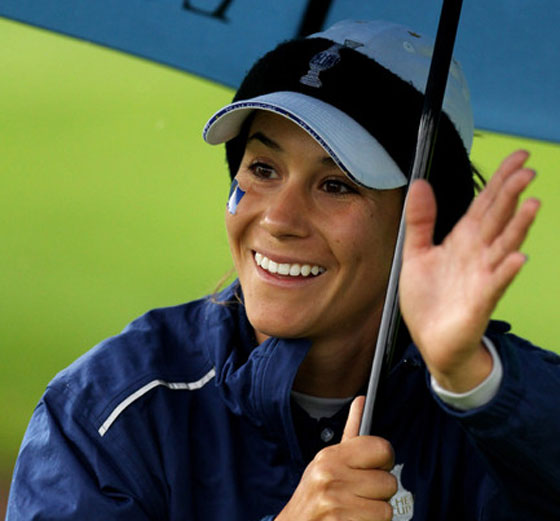 Golf has a hard time finding space in the front pages of Spanish newspapers, between names like Messi and Cristiano, Nadal and Iniesta, Gasol and Alonso. And there is a good reason, of course…

Logically, the star athletes have many followers and, almost instantaneously, they generate a need for information. That’s just human nature.
(Allow me this parenthesis because I think there is another reason a little more cynical and pessimistic. In today’s sports journalism, where everything is recyclable, where the loud noise, the easy joke or the exclamation point is a priority over deep analysis, it’s much easier and entertaining to talk about the Mohawk of a Brazilian star than anything else).
However, it is only fair to communicate to the common citizen what Azahara Muñoz Guijarro has been able to do in Ireland on this Sunday, September 25, 2011. She stole the decisive point of the Solheim Cup from American Angela Stanford, a player in the top 25 of the female money-makers in the history of golf.
Also, it is only fair to announce to the common citizen what is going to happen in women’s golf in Spain in the next few years. Or better, what is already happening. There is a very special generation of players in the making. Their game is high quality, and they have an unbelievable competitive edge.
Nobody talked about women’s tennis in Spain… until Arancha came along. Not in the newsroom, nor in the streets.
Obviously, we are not going to compare golf with other sports more traditional and deep rooted in the popular culture of our country. Even Severiano had trouble making the news cast.
But we would be caught in some sort of catch 22 if nobody tells the story, and the real dimension of the specific achievements of an athlete. Spain showed plenty of ignorance and slowness when it was time to tell the story of the 'monster’ successes of Severiano. His achievements are still unmatched in the history of our sport.
It’s only fair to say loud and clear to everyone that golf is not a rich man’s game. The roots and essence of this game are very much popular, although many are interested in portraying it otherwise in Spain…
Obviously, we are not comparing Azahara to Seve, but the Solheim Cup has depth. It’s a globally relevant golf tournament that millions of people followed this week, and where a Spanish player surprised the world.
First, she did it matching Kerr and Creamer in a foursome for the history of the Cup on Saturday morning, paired with Matthew. Needless to say that Kerr and Creamer are probably the best foursome pair in the world. Or that they finished that match three under par, but walked away with only half a point.
And finally, best for last, Azahara did it with that shot at the 17 hole on Killeen Castle. A shot that will live forever in the history of Spanish sports.