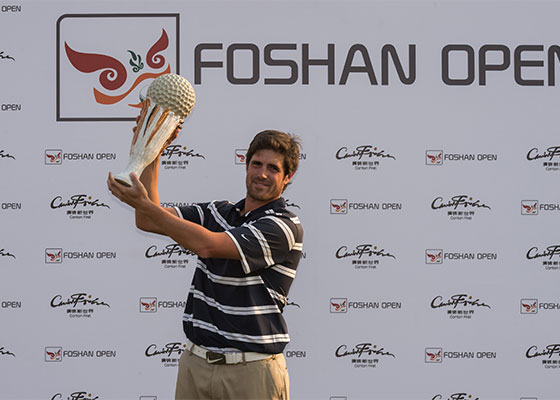 This year’s European Challenge Tour season will climax with a series of events known as the Final Swing, taking in four tournaments across China, Oman and Dubai, the closing three of which will receive more Official World Golf Ranking points to reflect their increased significance on the golfing calendar.

At the climax to a season which will have featured 27 tournaments played across 21 countries, this latest initiative acts as proof to the global reach of European golf’s second tier, with these four big money events set to play a crucial role in determining the top 15 in the Rankings, who will graduate to The European Tour in 2015.

The excitement will get under way at the inaugural Shankai Classic from Oct 16-19, before the second leg of a Chinese fortnight is completed with the return of the Foshan Open the following week.

Last season Nacho Elvira claimed a maiden title in Foshan City to secure his graduation to The European Tour, while Roope Kakko achieved a similar feat a week later at the inaugural National Bank of Oman Golf Classic, which returns in 2014.

Places in all three fields will be allocated from the season-long Rankings, with spaces also available to local talent through invites from the local golf federations in each territory, as the Challenge Tour continues to grow the game across the world.

At the culmination of play in Oman, on the Greg Norman-designed Almouj Golf – The Wave, Muscat, the top 45 in the season-long list will earn their place at the Dubai Festival City Challenge Tour Grand Final hosted by Al Badia Golf Club.

Last season the emirate’s iconic skyline provided the perfect backdrop to the innovatively designed clubhouse, as Shiv Kapur romped to a thrilling four-shot triumph. It proved a fitting close to the season, during a week where the final make-up of the graduating class was not determined until the final putt dropped at Al Badia.

Each stroke throughout these four weeks will therefore be crucial, with a place amongst The Race to Dubai’s elite on the line for all those teeing it up. This season will also see the added benefit of increased world ranking points on offer, which promises to add a little extra spice to proceedings as the pressure cooker intensifies.

The world ranking defines many of the elite fields across all of the professional tours, with a spot amongst its top 50 the mark to which many aspire, and strong performances in the Final Swing could see some players take an initial step towards those hallowed spots.

Both the Foshan Open and the National Bank of Oman Golf Classic winners will receive 13 world ranking points, an increase of one on last year, while the season-ending Dubai Festival City Challenge Tour Grand Final hosted by Al Badia Golf Club victor will also earn one more point than 12 months ago, with 17 awarded this year.

The Final Series therefore offers a great opportunity for all of those teeing it up to earn their place on The Race to Dubai, and with seven former Challenge Tour players set to represent Europe at the upcoming Ryder Cup later this month, it acts as further proof of what can be achieved for those starting their careers on the second tier.

ANA Inspiration the first Major of 2021 celebrates 50th anniversaryNews
28 February, 2021
The 50th edition of the ANA Inspiration will take place April 1 - 4 at Mission Hills Country Club, Rancho Mirage, California, marking a return to its usual position on the calendar as the first…
PGA of America to allow for use of distance-measuring devices during its Major Championships, beginning in 2021News
28 February, 2021
The PGA of America today announced that, beginning in 2021, the use of distance-measuring devices will be allowed during competition rounds at its three annual Major Championships: the PGA…
Dominant DJ claims second Saudi triumphNews
28 February, 2021
Dustin Johnson earned his second Saudi International powered by SoftBank Investment Advisers title in three years after holding off the chasing pack to secure a two-stroke victory at Royal Greens…
Johnson pulls clear of Perez in SaudiNews
28 February, 2021
World Number One Dustin Johnson finished with back-to-back birdies to take a two shot lead into the final round of the Saudi International powered by SoftBank Investment Advisers as he attempts to…