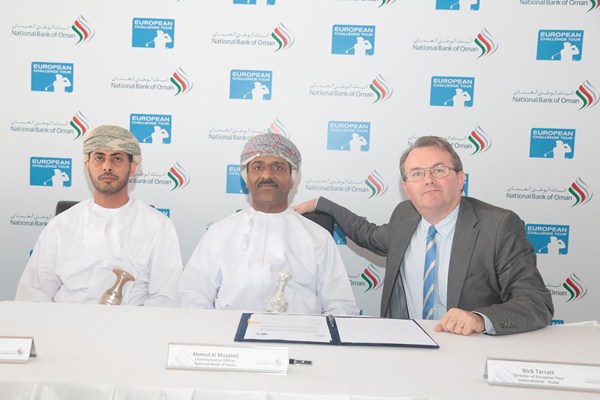 The European Challenge Tour’s Rankings will form the newly-named Road to Oman, culminating in the crucial NBO Golf Classic Grand Final in the Omani capital of Muscat, where a brand new bonus pool of €60,000 will be on offer for those who finish the season in the top three.

The new concept further signifies the importance of the new Grand Final, hosted and sponsored by NBO (National Bank of Oman), and reflects the growing strength and depth of one of the world’s top developmental tours.

The 2015 Road to Oman will take in 25 tournaments in 19 different countries, mixing historic tournaments such as the Barclays Kenya Open and the Rolex Trophy with newer events in developing golfing nations such as Slovakia, Turkey and China.

At the all-important Grand Final, the 45 highest-ranked players will battle it out for the top 15 spots in the final Road to Oman Rankings, earning them graduation to The European Tour – thereby following in the footsteps of such golfing luminaries as Thomas Bjørn, Martin Kaymer and Henrik Stenson.

Furthermore, a new bonus pool will be available for those players who finish in the top three of the Road to Oman, meaning the chase for European Tour graduation will be given an exciting new dimension in 2015.

The winner of the Rankings will not only be awarded the honour of being crowned Challenge Tour Number One – receiving an engraved Rolex watch – but he will also receive the lion’s share of the bonus pool, an added €30,000.

The development marks an exciting new era in the Challenge Tour’s 27 year history and provides further proof of its increasing strength and success in producing the most talented young players in Europe and beyond.

Alain de Soultrait, Director of the Challenge Tour, said: “This is an exciting new development for the European Challenge Tour. Our schedule has for many years taken us to every corner of the earth and this year’s Road to Oman will see us visit places such as Kenya, Kazakhstan and China before ending in a nation which is displaying great vision and commitment in growing the game of golf.

“There is no better place to finish our journey than Oman’s beautiful capital Muscat and the NBO Golf Classic Grand Final.

“This year’s Road to Oman is set to be the most exciting season in the history of the tour, especially at the NBO Golf Classic Grand Final, where the battle for the extra bonus pool on offer will add to the enthralling race for European Tour graduation.

“We extend our sincere thanks to NBO for putting their weight behind this new initiative and putting their faith in the Challenge Tour, while we must also thank Rolex and the R&A for their continued support.”

Ahmed Al Musalmi, the Chief Executive Officer of the National Bank of Oman, commented: “We continue to support our Nation’s growth and prosperity through our corporate social responsibility initiatives, and this is another momentous occasion for the National Bank of Oman. The Road to Oman will further focus the attention of the golfing world on the Sultanate of Oman and on the NBO Golf Classic Grand Final in the various countries the Challenge Tour visits throughout the season.

“As each step along the Road to Oman takes the players closer to The Wave Almouj Golf, Muscat, and their European Tour destiny at the NBO Golf Classic Grand Final, Oman’s global profile will be raised further on the world golf map. It adds another dimension towards taking all the benefits Oman can offer to worldwide horizons.”

Oman has for the past two years hosted the National Bank of Oman Golf Classic, which quickly became one of the most popular tournaments on the schedule. The spectacular venue and Greg Norman-designed links-style layout was complemented by a professionalism and hospitality which made it a stand-out event for players, staff and fans alike.

It was only fitting, therefore, that the tournament be upgraded to become the most important on the Challenge Tour schedule.