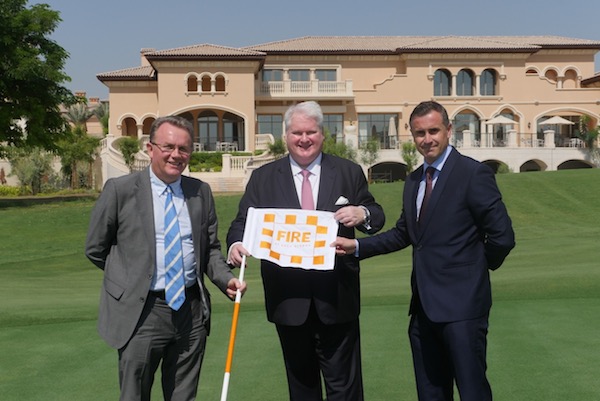 The leading players on the Road to Oman Rankings are set to lock horns in Dubai when the ICAEW Challenge Tour Pro-Am gets underway on the Fire course at Jumeirah Golf Estates on Wednesday October 28, 2015.

The event is part of a week-long programme for European Challenge Tour players to practice in Dubai between playing in the $500,000 Foshan Open, China finishing on Sunday October 25 and the €375,000 NBO Golf Classic Grand Final played at Almouj Golf The Wave in Oman which begins on Wednesday November 4.

The Challenge Tour players are invited to use the Jumeirah Golf Estates ETPI (European Tour Performance Institute) along with other practice facilities as well as honing their games on the Fire Course.

The highlight of the week will be the ICAEW Challenge Tour Pro-Am involving 20 professionals playing in a four-player team format with one pro alongside three guest amateurs from the Institute of Chartered Accountants in England and Wales (ICAEW). Among the players already confirmed areRicardo Gouveia, Jens Fahrbring, Rhys Davies, Ryan Fox and Dominic Foos.

Nick Tarratt of The European Tour said at the Pro-Am announcement: “This is a great opportunity for the Challenge Tour players to experience what is potentially ahead of them in their careers. The Jumeirah Golf Estates ETPI facilities are up there with the best of its kind in the world and we are also bringing over Jean Jacques Rivet from the ETPI in Terre Blanche to assist Mark Gregson-Walters and his Jumeirah Golf Estates ETPI team with the training.   We wish all the Challenge Tour players all the best in this important week for them as they acclimatise and tune up for the final event of the season in Muscat, Oman”.

Michael Armstrong FCA, Regional Director ICAEW – Middle East, Africa and South Asia added: “We are very excited to be a part of this prestigious event and to work with partners who are as dedicated to supporting and promoting talent in their field as we are in ours. Whether it is on the green or in the boardroom, people’s capabilities must be nurtured and they must be given the appropriate tools, focus and direction so that they may rise to the top of their careers”.

Neal Graham, General Manager, Club Operations of Jumeirah Golf Estates concluded by saying: “The Challenge Tour is a proven, emerging platform for some of the world’s leading players, including our own Brand Ambassador: Henrik Stenson. We look forward to hosting the next crop of European Tour stars for the ICAEW Challenge Tour Pro-Am, who will undoubtedly benefit from the world-class European Tour Performance Institute in the way many of the game’s top players continue to do so. I’d like to thank our partners at The European Tour and ICAEW for their support in bringing this exciting, new event to Jumeirah Golf Estates. It is a perfect showcase for the potential future DP World Tour Championship hosting on our Fire course, and I know many of our members and residents are looking forward to engaging with these top, young professionals throughout the week.”

The top 45 players on the Road to Oman Rankings qualify for the Oman event and then the final top 15 ranked players following the NBO Golf Classic Grand Final will earn their playing privileges on the 2016 European Tour International Schedule.

CURRENT LIST OF PLAYERS CONFIRMED TO VISIT JUMEIRAH GOLF ESTATES AS AT 29.09.15