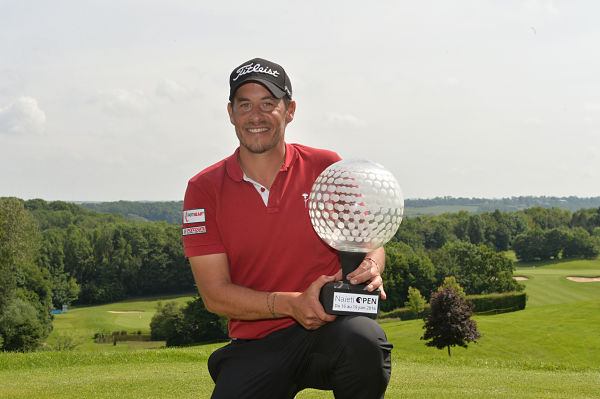 The Portuguese started the day three shots behind overnight leader Duncan Stewart but a closing round of 68, three under par, left him two shots ahead of the field on nine under par, and took him to tenth place in the Road to Oman Rankings.

Just as in 2004, Italy’s Tadini was his closest challenger, though this time he shared the runner-up spot with the impressive Thomas Detry in just his second event as a professional.

Lima, winner of three previous European Challenge Tour events but none since 2009, used his experience and knowledge of the difficult course in northern France to triumph in windy conditions, and was tearful after his round following a tough start to the season off the course.

“I’m very happy and it’s very emotional for me,” said the 34 year old. “It’s been really hard, because of many things – my back was bad and I had to stop, and I had a baby this year, and it’s been tough.

“I don’t know how I’m feeling. I’ve been playing well for many weeks now but haven’t been lucky on the greens but I like this course, everybody knows that, and I’ve shown that’s true.

“It was strange because when I saw Tadini on the top of the leaderboard it reminded me of 2004. And I thought ‘wow, me and Tadini again, maybe today is for me,’ like it was 12 years ago – it was a good omen.

“I was feeling good on the course today, I was playing well. I wasn’t really looking at the leaderboards, I was just taking my gameplan and playing well and I knew, if I did that, today would be good for me.

“I played really good golf today. I missed some short putts but around here I think everybody does that, so I tried to focus on my game and what happened happened.

“I was enjoying myself out there, enjoying my game, enjoying the people I was with, and it was like that all week and that’s the most important thing now for the rest of the season.

“I’m feeling good, my game is good, and the aim is of course to get the top 15 and play on the European Tour – I know my game now and I know that I’m good enough, so I’ll now focus on the Challenge Tour and hope I’m still playing this well at the end of the season.

“I really don’t know how to feel. I was not feeling like the win was a long time coming, I was just playing and it’s now happened – that’s golf, you have to be calm at all times, work hard, and when you work you have some luck. I’m working more than ever right now so maybe I’m luckier too.”

Tadini’s four under par round of 67 was the best of the day, while Belgium’s Detry birdied the last to join him on seven under par and record a second consecutive top ten finish, just two weeks after joining the paid ranks.

Scotland’s Stewart was one shot further back alongside Dutchman Daan Huizing, with Victor Riu the highest-finishing Frenchman of the week in sixth place on five under par.

Race to Costa del Sol returns in South AfricaNews
9 May, 2021
A new Ladies European Tour (LET) season gets underway next week with the Investec South African Women’s Open at Westlake Golf Club, the first event on the 2021 Race to Costa del Sol. The Race…
Catlin claims third European Tour title in AustriaNews
9 May, 2021
John Catlin claimed his third victory in just 13 events at the Austrian Golf Open after the American triumphed in a dramatic five-hole play-off with Maximilian Kieffer, following a similarly…
Kaymer hoping to bridge seven-year gap with Austrian victoryNews
9 May, 2021
Martin Kaymer is within touching distance of a first victory since winning the 2014 U.S. Open by eight shots, as the German enters the final round of the Austrian Golf Open in a share of the lead…
Cañizares digs deep at Diamond to maintain leadNews
9 May, 2021
Alejandro Cañizares recovered brilliantly from a stumbling start to his second round at the Austrian Golf Open to maintain his lead at Diamond Country Club, where Martin Kaymer’s presence…