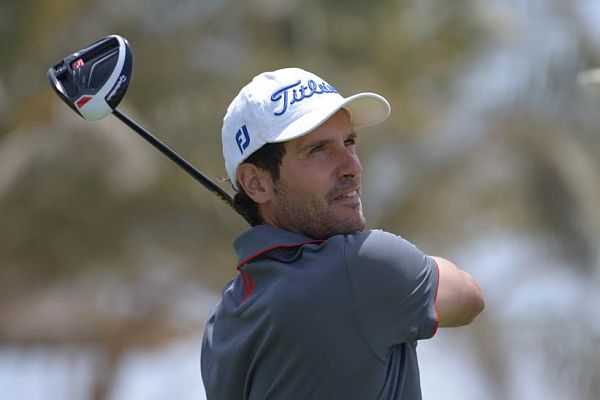 Matteo Delpodio returns to his native Italy for the Montecchia Open by Lyoness refreshed after a two-week rest and ready to draw on the memories of the last Italian Challenge Tour event as he bids for a second career win.

The Turin native won the EMC Challenge Open at Rome’s Olgiata Golf Club – recently announced as the host of the 2017 Open d’Italia – last October for a popular and emotional maiden victory, with his mother watching him play for the first time in his career.

That win put the 30 year old inside the top 45 of the Road to Oman Rankings but was too late to push him into the top 15 and earn graduation to the European Tour, an outcome he is keen to avoid repeating this year.

“I have very good memories of our last visit to Italy,” he said. “I think golf is so strange, you have to just concentrate on the present moment and try to do your best every time you get on the first tee.

“I think that to start the season well is very, very important, not just for your game but for your confidence and for the attitude you can then have to the season.

“Last season I started very badly and put a lot of pressure on the end of the season which, eventually, came out with a victory in Rome but you really don’t want to have this pressure at the end of the year, especially when you have the big events and the Qualifying School if you need it.

“To start well helps to relax you a little bit, to lower the pressure, and that then helps to let your game come along through the season.

“That victory changed the way I’m thinking about golf and about everything in general because it proved to me that I can perform at that level and I can be not just here but on the European Tour. That was a very important week for my golf in general I would say and I will keep those good memories and try hard.”

Delpodio withdrew from the Challenge de Madrid after one round of the tournament through illness that also prevented him from teeing it up at last week’s Turkish Airlines Challenge, but top 30 finishes in the first two events of the 2016 season suggest his best form is not far away.

Golf della Montecchia is bedecked in Ryder Cup insignia this week following the announcement last September that Rome’s bid to host the 2022 competition had been successful, providing an obvious long-term target for all Italian golfers.

Edoardo Molinari is a recent example of what is possible after he topped the Challenge Tour Rankings in 2009 before, alongside his brother Francesco, forming part of the successful Team Europe in 2010.

Delpodio, however, is doing his best to remain grounded, acknowledging the excitement around Italian golf but refusing to get too carried away at this stage.

“It’s super for Italian golf to have the Ryder Cup,” he said. “When you look around and see the signs, you still cannot believe it – I think the years to come are going to be so exciting for all of us.

“The team did such a great job in achieving that result – I mean, you think about it: the Ryder Cup in Italy, it’s something you could not believe until the day of the decision, or even then.

“To play 2022, who knows? Of course it is a target, but let’s keep our focus on the present. The public, journalists, sometimes they try to push you to the future or the past, and sometimes when you want to play your best golf you have to be in the present.

“Of course, Marco Simone is a dream for all of us but let’s start with Montecchia, one step at a time, because otherwise you can rush things.”

A strong field in Padova will be looking to prevent Delpodio from doing an Italian double, among them Norwegian Espen Kofstad, himself a two-time winner on Italian soil, who is on the verge of Olympic qualification.

Road to Oman Rankings leader Sebastian Soderberg will be bidding to further extend his advantage after another top three finish in Turkey, while the form player in the field is France’s Matthieu Pavon who has finished fourth and second in the last two weeks.