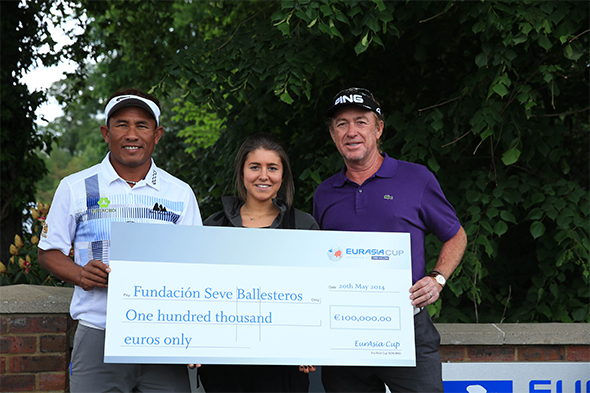 EurAsia Cup Captains Miguel Angel Jiménez and Thongchai Jaidee gathered at the headquarters of The European Tour during the BMW PGA Championship to present a cheque for €100,000 to the Seve Ballesteros Foundation (SBF) which was represented by Seve’s daughter, Carmen Ballesteros.

The SBF was the Official Charity of the inaugural EurAsia Cup presented by DRB HI-COM, a tournament which saw Europe take on Asia in an enthralling contest that finished in a 10-10 tie following a thrilling final round comeback by Team Asia in Kuala Lumpur, Malaysia.

Receiving the cheque for €100,000 on behalf of her father’s foundation, Carmen Ballesteros, said: “On behalf of my brothers, Javier and Miguel, and myself, I just want to say a huge thank you to everyone involved in the EurAsia Cup for helping to raise such a significant amount of money for the Foundation.

“Miguel and Thongchai were so happy to present us this cheque and we are delighted to receive it. I think somehow the first EurAsia Cup was supposed to end in a tie. It was a great advertisement for golf and I have no doubt my dad would have enjoyed watching it. I would love to see this tournament being played in dad’s home town of Pedreña one day – that would be very cool.

“It was also a great week for the SB Foundation. The money that was raised by the EurAsia Cup will all go to the Spanish National Cancer Research Centre (CNIO), where Dr. Massimo Squatrito leads the research into brain tumours at the Seve Ballesteros Foundation Laboratory”.

Seve established the SBF in 2009 with the aim to contribute to the advancement of science for the benefit of those suffering from brain tumours, and also to help talented young players giving them the opportunity to play golf. The SBF also aims to introduce young children to golf using the game as a vehicle for social development.

You can see and hear more from Dr. Squatrito about his work at the CNIO: http://www.seveballesteros.com/programme/projects.html