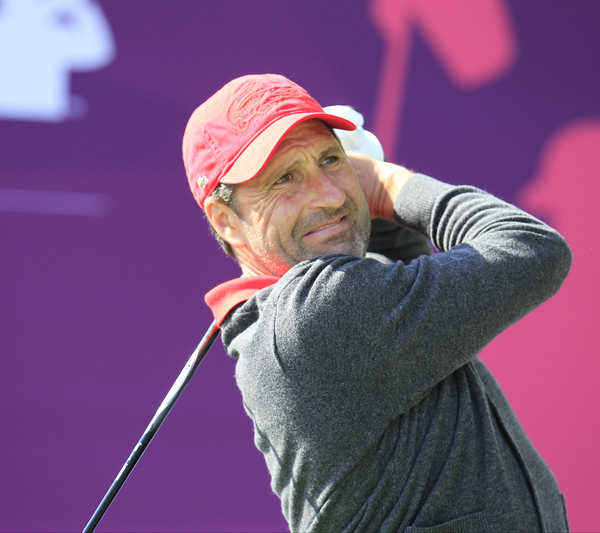 With a number of former Ryder Cup players and captains now competing on the Senior Tour, the biennial contest’s presence will also be felt when The 2018 Ryder Cup host course Le Golf National hosts the French Senior Open (September 9-11), three weeks before Europe tees off against the United States in The 2016 Ryder Cup at Hazeltine National.

Also new to the Senior Tour calendar is the Italian Senior Open (October 21-23) at Golf Club Udine which is the first event in six years to be held on Italian soil. The new €350,000 tournament is part of the commitment to European golf made by the successful Italian bid for the 2022 Ryder Cup.

The third inaugural event in 2016 is the Willow Senior Golf Classic, to be held at Hanbury Manor Marriott Hotel & GC, Hertfordshire (August 26-28). The tournament will raise funds for Willow, which provides Special Days for seriously ill young adults.

Following the U.S. Senior Open Championship at Scioto Country Club in Ohio (August 11-14), the Willow Senior Golf Classic is the middle event in a three-week run in the United Kingdom which starts with the Prostate Cancer UK Scottish Senior Open at Archerfield Links (August 19-21) and ends with the Travis Perkins Masters, now in its 16th year, at Woburn Golf Club (September 2-4).

Former Ryder Cup captain Colin Montgomerie will launch the 2016 season when he chases a record-equalling hat-trick of victories in the US Senior PGA Championship presented by KitchenAid from May 26-29, the first event on the 2016 Senior Tour calendar.

Montgomerie will also be aiming to lift the John Jacobs Trophy for the third consecutive time after topping the Order of Merit in both 2014 and 2015.

Following the completion of the US Senior PGA Championship, the focus returns to a former Ryder Cup venue in the form of The Celtic Manor Resort, where Paul Wesselingh will defend his title in the SSE Enterprise Wales Senior Open, which is being held at the Newport venue’s Roman Road course for the second consecutive year (June 3-5).

Peter Fowler, last year’s Order of Merit runner up, will then defend the Acorn Jersey Open when the Senior Tour returns to La Moye Golf Club from June 9-11, the course where the Australian made his European Tour debut 33 years ago.

It is a landmark year for a number of events on the Senior Tour as the 30th edition of the Senior Open Championship Presented by Rolex will be held at Carnoustie Links (July 21-24). The 2016 Swiss Senior Open marks the 20th anniversary of the tournament at Golf Club Bad Ragaz (July 1-3) and WINSTONgolf, in Vorbeck, Germany, will host the WINSTONgolf Senior Open from July 8-10 for the fifth straight year.

The recently announced Italian Senior Open will be the penultimate event before the season-closing MCB Tour Championship, which returns to Constance Belle Mare Plage for the sixth year in succession (December 9-11). That will bring the curtain down on a season in which the players will compete for a prize pool of €7.75million.

Andy Stubbs, Managing Director of the European Senior Tour, said: “We are delighted to be able to announce three new events as part of our 2016 schedule, with the French Senior Open, Italian Senior Open and Willow Senior Golf Classic joining a number of long term events for our 25th anniversary season.

“With a number of former Ryder Cup captains and players now competing on the Senior Tour, it is fitting that both the French and Italian events have the support of the respective successful Ryder Cup bids for 2018 and 2022, meaning fans in both countries will be able to watch some of the legends of the biennial contest.

“Our thanks go to all of our promoters, sponsors and partners for their support, and we look forward to seeing if Colin Montgomerie can win a hat-trick of John Jacobs Trophies, or if someone else will succeed him as the winner of our Order of Merit in 2016.” 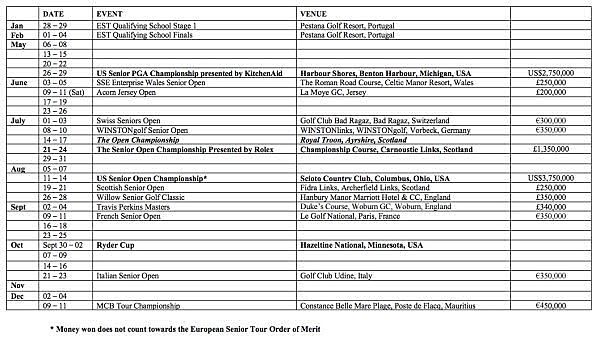