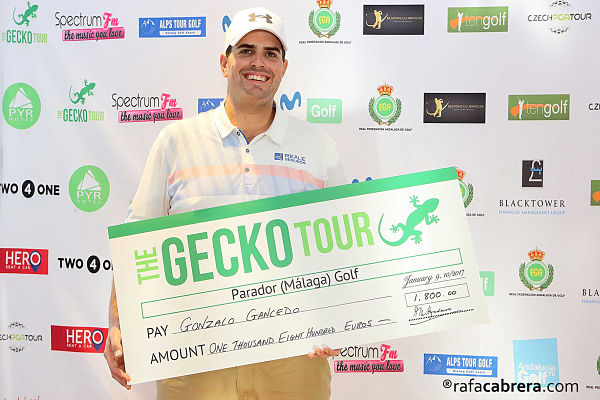 “Never stop believing”. Gonzalo Gancedo has been repeating this phrase over and over like a mantra these past months and he finally did it. It was today, at the Parador de Golf in Malaga, close to his house and just meters away from the Guadalhorce course, where he buckled down and learned how to play golf alongside his good friend Pablo Martín Benavides. “Pablo is my idol together with Tiger, and he knows it. He taught me the approach”, he assures with his unmistakable smile just minutes after having won the first tournament of the 2017 Gecko Tour and the ninth of the season.

Gancedo won at the Parador with a total score of 136 shots in 36 holes. British golfer Mike Bedford and Slovakian golfer Peter Valasek shared second place, two shots from the winner, while Andreas Andersson, leader in the order of merit in the Gecko, Rod Bastard and Ross Kellett finished in fourth.

Gancedo built his victory from the first superlative round up. He shot a 64, with five birdies and a sensational albatross. “It was on the 1st hole (The tenth of the round). I hit a drive and a 6 iron perfectly. The key was that I knew how to get the most out of the par 5s. I caught them all in two shots and signed a partial of six under par. After it was all said and done, truthfully, I think I played today on holes 1 through 12 better than yesterday, but I got lipped out various times”, he explains. Gonzalo was ahead with a four-shot advantage at one point, however, as with any good first victory, he couldn’t have won without having had to suffer. “From the 12th hole on, I started to lean instead of to turn, which is my main problem, and I held on as well as I could. I made a double bogey on the 15th, and on the 16th the demons started to come out again. I shot a nice drive, just to the left, but the bounce was really bad and was left unplayable. I had to drop the ball and I managed to get the par as best I could. I just kept thinking about finishing no matter what. When I shot the drive on the 18th I saw that it went how I wanted it to and I knew I had won, and I was fully able to enjoy it”, he remarks.

Gancedo’s story is interesting. This 28-year-old golfer born and raised in Malaga didn’t dedicate himself seriously to golf until he was 21. “I think I only played in two championships as an amateur, one in Spain and the other in Andalusia. However, when I was 21 is when Reale came about and I decided to turn to them to play. What more could I ask for. They allowed me to dedicate myself to what I loved most which was golf, and being surrounded by insanely talented players, because it’s incredible what a high level everyone has here”, he affirms.

Gonzalo started to make his way, playing in tournaments, coming close to the victory, but his first win never quite happened. It was all in his head. “I need to have more confidence in myself, believe in myself.

“From eights months ago to now, I’m much more confident in myself and it shows in the results. I fought for the win in various Gecko tournaments and I finished in sixth place in the Final at Gambito. And now I’ve pulled off my first victory. I’m very pleased”, he remarks.

Gancedo already has enough experience now to know how to take things step by step. For the moment, his first win happened. The next objective is to go for the second win. “I’m hungry for more, ready and willing to continue playing and to do things well, desire to win, but step by step. I’m going to continue in the Gecko which is a great tour and it’s a shame that we as professional Spanish golfers and sponsors don’t support it more, the Gambito and whatever I can of the Alps and the Challenge”, he declares.

5 Tips for Successful Golf BettingNews
14 April, 2021
The prospect of legal sports betting gets on the horizon with each new day. The common point of concern among golf enthusiasts is how exactly sports betting legalization will affect the sport. Well,…
European Tour Qualifying School schedule revealedNews
14 April, 2021
The European Tour Qualifying School has been bolstered by the addition of four new venues ahead of the competition’s return in 2021. Montado Hotel & Golf Resort in Portugal and…
Play-off success earns van Tonder maiden win in KenyaNews
14 April, 2021
Daniel van Tonder secured his first European Tour title at the Kenya Savannah Classic supported by Absa after defeating Jazz Janewattananond with a birdie on the third play-off hole at Karen Country…
Red hot Harding edges closer to second Kenyan crownNews
14 April, 2021
Justin Harding is 18 holes away from claiming back-to-back titles in the space of five days after the South African opened up a three-shot lead over an otherwise packed leaderboard heading into the…