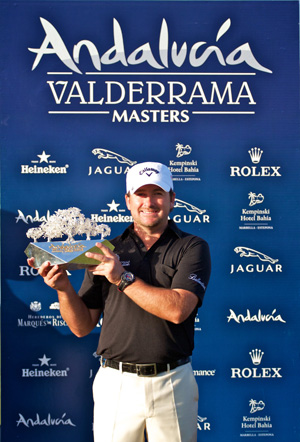 2010 US Open Champion Graeme McDowell has confirmed  his title defense of the Andalucía Masters, from October 27 to 30 at the prestigious Valderrama course. McDowell said, “Valderrama is an iconic course, one of the best on the planet. It’s great to have my name in the list of winners on this course”.

Last year’s edition saw McDowell win by two strokes from Gareth Maybin, Damien McGrane and Søren Kjeldsen. With this victory, the Ulsterman entered the world Top ten at the end of an outstanding season. Earlier in the year, he captured his first Major, the US Open Championship at Pebble Beach, shortly after his success at the Wales Open, at the same venue where he would become a Ryder Cup hero by securing the winning point for Europe.

He capped off the year in style at the Chevron World Challenge by holing a 20-foot birdie putt to force a play-off, and then proceeded to beat Tiger Woods at his own tournament. As McDowell’s putt fell, Steve Williams (Tiger’s caddie at the time) had to reach out for his bib which he had taken off thinking they had a sure win.

With eight titles to his name, including a Major, and two Ryder Cup appearances, McDowell will be looking for his first win this year at Valderrama. His 2011 record includes three top-ten finishes in the US and four in Europe, the last of which at the Alfred Dunhill Links Championship two weeks ago.

The Autonomous Government of Andalusia,owner of the tournament rights and its main sponsor, has entrusted Octagon, a well respected sports marketing company, with the organization of the Andalucía Masters.