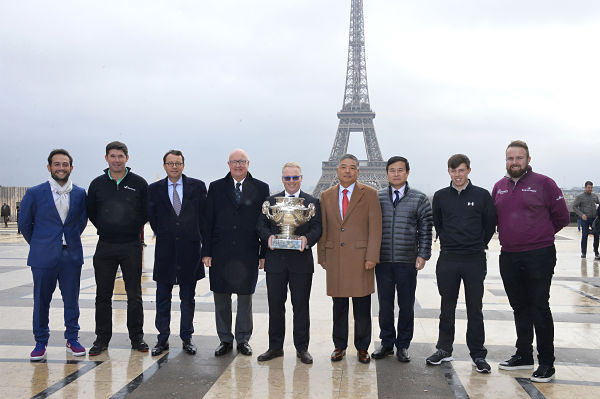 After celebrating its centenary last July, the Open de France will begin a new chapter in its illustrious history when HNA Group, a global Fortune 500 company focused on tourism, logistics and financial services, takes over as title sponsor of continental Europe’s oldest national Open in a five-year commitment starting in 2017.

The HNA Open de France, which will form part of the recently-announced Rolex Series and carry a prize fund of US$ 7 million, will take place from June 29-July 2 at Le Golf National in Paris, a member of the European Tour Properties network and the host venue for The Ryder Cup next year.

The tournament will be followed by the Dubai Duty Free Irish Open hosted by the Rory Foundation and the Aberdeen Asset Management Scottish Open, forming an impressive three-week stretch of Rolex Series events in the build-up to The Open Championship.

Keith Pelley, Chief Executive of the European Tour, said: “We are delighted to announce this exciting relationship with HNA Group which represents a significant new era in the proud history of the Open de France.

“I would like to take this opportunity to thank HNA Group for their vision and commitment, not only to the Open de France but to the European Tour as a whole.

“We are also grateful to everyone at the French Golf Federation for their continued commitment to the tournament, which celebrated its 100th edition last year. With France preparing to host the Ryder Cup in 2018, today’s announcement that the HNA Open de France will be part of the Rolex Series is another important milestone for French golf.”

Chen Wenli, Vice Chairman of HNA Group, said: “The commitment we are making to the European Tour represents a new and exciting era for this historic national Open, and provides us with an opportunity to promote HNA Group as a global leader in travel and tourism across a wide consumer audience in connection with a prestigious event.  We look forward to welcoming fans to France – one of the world’s great destinations. This partnership is a true win-win for HNA and the European Tour.”

First played in 1906, the Open de France became just the seventh national Open worldwide to be played 100 times this July, when Thailand’s Thongchai Jaidee held off Francesco Molinari and Rory McIlroy to claim his eighth European Tour title. The event was not played from 1915-19 and 1940-45 due to the First and Second World Wars, but has been a permanent fixture on the European Tour since the Tour’s formation in 1972. The rollcall of honour includes Major Champions Seve Ballesteros, Greg Norman, Sandy Lyle, Sir Nick Faldo, Bernhard Langer, Retief Goosen, José María Olazábal, Martin Kaymer and Graeme McDowell.

Jean Lou Charon, President of the French Golf Federation, said: “As the oldest tournament in continental Europe, having been staged for the 100th time in 2016, the Open de France is one of the most legendary events in French sport and in golf globally. We remain as determined as ever to preserve its status as a shining beacon of our sport in France, and ensure that it continues to promote golf across the country.

“I would like to thank all the Amaury Sport Organization (A.S.O.) team for their efficient work to help strengthen the tournament. The arrival of HNA Group, alongside FFGolf and the European Tour, represents a magnificent opportunity to enhance its status even further, and is also reward for the hard work the FFGolf’s team has put into making the tournament a world-class event.

“I am delighted with this major development for French golf and our great champions, which will see Le Golf National, the host course of the next Ryder Cup, continue to welcome major golf competitions and the best players in the world.”