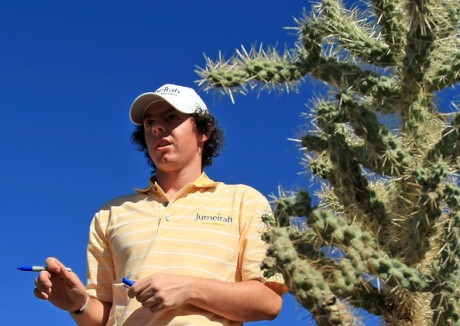 Rory McIlroy (Holywood, Northern Ireland, 1989), young prodigy of the European golf and future Major winner according to many experts, leads the majestic Race to Dubai finals just before the last event of the year. Do you want to know a little bit more about him?

McIlroy gave an exclusive interview to TENGOLF. Our first impression, after turning just 20 last May, is that Rory is a bright, curious and open young man. And with an interesting personality, as we found out in our long conversation with him…

You get to the ball, look and hit. That’s your style of golf. Is this a routine you have worked on or is it second nature for you?

I am a pretty quick player. Ever since I was two years old, that’s the way a learned. I look and I hit. That’s the way it comes naturally to me. I don’t like to stand over the ball too long. I pick my club, I get my number and I hit.

You have a lot in common with Sergio. A young star with a lot of promise … even the way you twist your body when driving the ball. What do you think?

There has been a lot of comparisons with Sergio. Obviously, when he came out on tour he was very young, like myself. I am very happy to be compared with Sergio because he is such a good player. He is a great guy as well. Hopefully I can win the number of tournaments he’s won. He is a great player and hopefully he can win a major some day, like everyone hopes he can. I am happy to be compared with him.

That kind of pressure has not worked well for García in the majors. Do you have a good relationship with him? Have you two talked about this?

We haven’t talked about it. We play practice rounds together and I’ve got to know him better over the past year or so. We talked, but not about that. I am sure that’s the last thing on his mind, talking about wining a major. We get along really well together. He is a really great guy and I enjoy his company.

Do you remember the day you realized you could make a living playing golf?

I won my first big amateur tournament when I was fifteen. That’s probably the point when I thought I could be pretty good at this. Ever since then, I’ve played Walker Cups, I concentrated in my amateur game and won the Silver Medal at the Open. Once I did these things, the next step for me was to turn professional. It was a big risk for me to turn pro, but it has turned out pretty well.

The American dream … What are your expectations for the PGA Tour? Are you going to mix both tours?

Yes, I will play my events in Europe and I’ll play my events in America. This year I’ve played 11 events in the PGA Tour. Obviously if I want my tour card I’ll have to play 15 and I am still thinking about it at the moment. I love playing over there. I thing their golf courses fit my game and I’ve done well over there this year. I am looking forward to playing over there and playing both tours. Specially next year, the way the schedule works out, I’ll play at the Abu Dhabi and then a lot of golf in the United States up until May. I really like America. I am not sure if I am going to get my tour card, but I will play a lot over there anyway.

How is your relationship with Tiger? Do you know him well? Do you talk to him? Do you have any contact with him?

Not really. I had a few conversations with him in the past, but nothing serious. I don’t have his phone number or anything. I don’t really know him that well. I say hi to him, but that’s about it.

What do you think of Tiger?

He is phenomenal. I think everyone will say that. To win the amount of tournaments that he has, and keep the performance level up and keep the motivation the whole way through his career, it’s unbelievable. We are seeing someone that is probably going to be once in a life time. Obviously Jack Niclaus is the same. Tiger is the Jack of this generation. In the years to come there will be a lot of guys coming, like myself, Ricky Fowler in America … many. Hopefully, if we keep practicing hard enough we can get to the level where we can win majors as well.

Do you try to learn from your golf partners? Can you think of anybody in particular?

Not really, I like to figure things out for myself. If I am struggling with something I try to work it out on my own. I don’t really ask for advice or look at other people trying to pick up a few tips. I am concentrating on my own game and trying to get the best out of it.

Spain offers sun and a growing number of good courses, but we don’t have British links. What are we missing out on?

Well, you have El Saler, which is pretty similar. I played the Spanish Amateur there. Obviously the grass and the terrain is so much different. But it still can get windy here. It can get very windy here. But they are different shots, also around the greens, with deep bunkers. It’s a completely different style of play, but some of the golf courses around here are great.

¿Are links your favorite type of course?

Do you like the fact that many people in Europe consider McIlroy the anti-Tiger?

The golf event more passionately followed in Spain is the Ryder Cup. It came as a surprise when you said it wasn’t an important goal for you. What was the context of your words? Can you explain it?

It was in the middle of that season, when team golf was the last thing on my mind. I had just missed the cut at The Players, and I was at the Irish Open. I was at the press conference and a question came up about the Ryder Cup, and I was trying to say that the Ryder Cup, in that moment, wasn’t important, because I was concentrating in a lot of other things. But I wasn’t trying to say that the Ryder Cup isn’t important, because I played the Vivendi Trophy in France a few weeks ago and I love team golf. That’s a little bit of what the Ryder is going to be like. Hopefully I’ll make the team and I can’t wait for it. Next year it will probably be the biggest event I’ll play in. So, I did say those things, but it wasn’t the way I wanted it to come out. I was trying to say that it was the middle of the season and I didn’t care about that in that moment … But ask me in a year when I am trying to qualify for it. Then it will be very important.

What is the golf club that makes you feel better?

Lob wedge. I can take a lob wedge around the green and just chip and hit bunker shots. I can do a lot with a lob wedge in my hands.

A question about Seve Ballesteros and Nicklaus. You are very young and didn’t have the chance to see them at their best. Are you interested in what they and other great players in history have done? Have you asked about it or watched videos?

Yes I’ve watched videos. Every video I’ve watched it was Seve hitting out of the rough, out of the trees, chipping in, holing a putt. He was unbelievable. He kind of made the European Tour. He was so charismatic and everyone wanted to go out and watch him. He was a legend all over the world. If it wasn’t for Seve the European Tour may not be what it is today. Seve has been very important for this tour. I’ve never had the chance to meet him. I thought I may have met him at the Vivendi Trophy, but he wasn’t able to travel. Then, this week he was supposed to come down, but he wasn’t able to travel again. I hope one day I’ll meet him. It will be a great honor, because he has done so much for the European game.

What do you like to do best when you are not playing golf?

Shopping, hanging out with friends, play some football, play some tennis…

Do you like football? What do you think about the Spanish national team?

Yes, I like it. I think they have a very good chance in the World Cup next year. They are very good. I think they are going to be very strong, specially with Torres. Also Xavi, Xavi Alonso … There are so many great players in that team. I think is going to be a very tough team to beat.

What is your favorite team?

Manchester United. So Fernando Torres gave as a little bit of a lesson a few weeks back.

Do you play football? What position?

Yes I do. Right wing.

You are young and fame came to you early in your life. How do you handle that?

I just want to play golf. I am a golfer and that’s what I do. If someone wants me on TV or someone wants an autograph or anything, I am happy to do it. It’s part of the job. I rather be known that not be known, because then I wouldn’t be playing well enough. I am happy with what I am at, at the moment, and hopefully I can get more and more famous in the world of golf and play better an better.