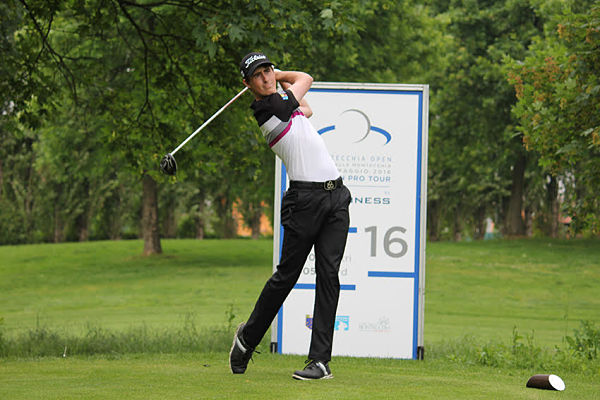 Rain once again stopped play at the Montecchia Open by Lyoness but not before Ireland’s Gary Hurley posted the clubhouse target of 14 under par after completing his second round at Golf della Montecchia.

After heavy rain prevented any golf from being played on Thursday, the event was already reduced to 54 holes, with a Monday finish not ruled out if necessary and the majority of afternoon starters still with holes to play before the final round can start.

Hurley built on his excellent opening round with a six under par 65 that put him on 14 under par before the storms hit, and he was delighted by the end of his round as he finished birdie-eagle to lead Jurrian van der Vaart by one shot.

“I started well,” said the 23 year old. “I birdied the first but then I kind of struggled a bit until the 18th, my ninth, where I made another birdie, but then on the back nine I found something again with my swing and just hit a lot of good shots.

“I actually had a lot of chances on the back nine and I was disappointed coming onto the eighth tee with the score I was on because I had so many chances and missed a lot of putts.

“Then I holed about a 20 footer on eight for birdie and then I hit two great shots on nine to about two feet – it was probably my shot of the tournament so far, so I’m delighted with my finish it definitely helps.

“I saw the leaderboards as I was going round, I saw where I stood. I saw there was a guy in the clubhouse on 13 under so, coming off the eighth on 12 under, I just wanted to hit two good shots and give myself a chance for eagle, which I did, and holed it.

“I’m comfortable looking at the leaderboards, it doesn’t bother me – I’d prefer to know than not know because otherwise I’d be worrying about it and wondering. It’s hard not to look as well, there’s a lot of them out there.”

Hurley, a member of last year’s victorious Great Britain & Ireland Walker Cup team, has caught the eye this week for his unconventional method of lining up putts.

“I use the AimPoint Express technique,” he said. “I feel the slope of the green with my feet and give it a value between one and six – anything more than that would be a complete guess.

“I feel with my feet if my weight is a bit more on one side and I recognise the value which I’ve taught myself and I just know how far outside the hole to hit it then based on the speed of it going a foot past the hole.

“I started doing it about three years ago and it’s definitely improved my putting by about 150%, it’s an unbelievable difference, so I’ll continue doing it and hopefully get better at it.”

A stellar amateur career is no guarantee of making the transition into professional ranks, but Hurley credited the presence of compatriots at the same stage of their careers for helping him feel so comfortable in paid ranks so quickly.

“I’m staying in an apartment with two Irish lads, Gavin Moynihan and Cormac Sharvin,” he said. “It definitely helps being out here on tour with them.

“There were a lot of us Irish boys who all turned pro last year and it’s nice to share the journey with them because we inspire each other and lift each other.

“I was nervous today but that’s all part of it – if you don’t want nerves, that’s the bad thing. I look at nerves as being good, it shows that you care, it’s just learning how to control them. I learned a lot today about myself and hopefully I can learn a bit more tomorrow.”

Still to complete his round when the thunder rolled in was Gary King, who had just rolled in a birdie on the 14th to move to 15 under par, and into the overall lead, when the klaxons sounded and the course was evacuated.

One shot behind van der Vaart on 12 under par is American John Hahn who shot a second successive 65 for another strong week following a top ten finish in the Turkish Airlines Challenge.

Bjӧrk's birdie blitz earns Montecchia Open leadNews
14 April, 2021
A sensational finish from Alexander Bjӧrk, birdieing his last four holes, gave the Swede the first round lead ahead of Ireland’s Gary Hurley and Dutchman Jurrian van der Vaart at Golf della…
5 Tips for Successful Golf BettingNews
14 April, 2021
The prospect of legal sports betting gets on the horizon with each new day. The common point of concern among golf enthusiasts is how exactly sports betting legalization will affect the sport. Well,…
European Tour Qualifying School schedule revealedNews
14 April, 2021
The European Tour Qualifying School has been bolstered by the addition of four new venues ahead of the competition’s return in 2021. Montado Hotel & Golf Resort in Portugal and…
Play-off success earns van Tonder maiden win in KenyaNews
14 April, 2021
Daniel van Tonder secured his first European Tour title at the Kenya Savannah Classic supported by Absa after defeating Jazz Janewattananond with a birdie on the third play-off hole at Karen Country…