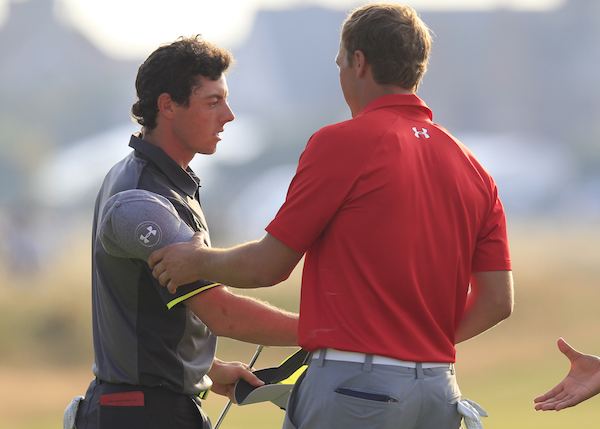 The absence of Rory McIIroy in the Open Championship has been a great disappointment. The magic of St Andrews, the origin of it all, would have been the ideal setting to witness a battle between golfers who have only just begun, but whom are already headed toward becoming golf legends.

Jordan Spieth and Rory McIIroy were going to go head to head with the objective of breaking the tie. Spieth has won the last couple Masters in Augusta and the US Open and McIIroy took home the victory in the Open Championship and the PGA Championship. Six of one, half a dozen of the other. The last four majors divided up among these four hands. What better than the home to Old Tom Morris to attend a battle of this caliber. However, McIIroy’s ankle has left us disappointed and without a duel.

In these past few hours, many have alluded to the fact that the absence of Rory is excellent news for Spieth. Really, now the American golfer has one less serious rival on his path to conquering his third consecutive major. This is undeniable and Perogrullo would sign off on that. However, I think it goes much deeper. At least I see it that way.

The absence of McIIroy is bad news for Jordan. A sudden blow, the enormous weight  this young 21-year-old has on his shoulders is now 50 pounds heavier. And it already weighed a ton! With McIIroy on the Old course,  the media attention would have dissipated. It’s true that Spieth, even with Rory there, would have already had a lot on his plate. In the end, he represents the big news of the week, the one that can win the modern Grand Slam, the golfer who could achieve something that nobody has ever done before. However, Rory’s presence would have taken some of that pressure off. McIIroy is the Number One in the world, defendor of the title and he still hasn’t won anything important yet this year, 2015. In other words, tons of pressure on the Irish golfer as well. However, out of commission, all that pressure is now on Spieth alone.

In reality, only Tiger Woods could steal some of the spotlight during the previous hours to the tournament. There will be three days of talking about the same thing, responding to the same questions and even more importantly, thinking about the same things. If there’s one thing the young Texan golfer has proved, it’s that he handles pressure extraordinarily well. Now he’ll have a chance to demonstrate it once again at the place where golf was born.