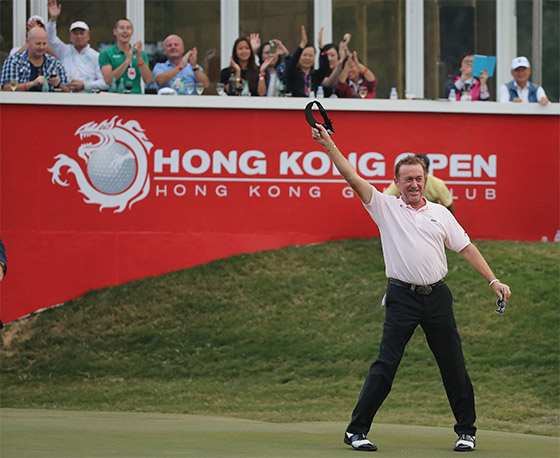 Miguel Angel Jiménez has been named the first winner of The European Tour Race to Dubai Golfer of the Month for the 2014 season following his record-breaking start in December.

The Golfer of the Month Award, now in its 30th anniversary year, is awarded to the European Tour member judged to have produced the outstanding performance each calendar month throughout the season.

The Spaniard, who receives an engraved alms dish and a Jeroboam of Moët & Chandon champagne, re-wrote golf’s history book with his spectacular defence of the Hong Kong Open – securing his fourth triumph in the tournament, following previous wins in 2005 and 2008, at the age of 49 years and 337 days which extended his own record as the oldest winner on The European Tour.

Jiménez, whose 20th European Tour win was his 13th since turning 40, said: “I’m very happy and grateful to have been voted Golfer of the Month. To do it in the way I did, with that big putt at the 18th (in a play-off) was very special.

“It’s very nice to now be 50 and still competing at this level, winning tournaments and it was even better to do it in Hong Kong, a place that I like very much and always enjoy going.”

Victory for Jiménez followed a play-off at Hong Kong Golf Club, Fanling, with Stuart Manley, of Wales, and Thailand’s Prom Meesawat – a superb 18-foot birdie putt at the first extra hole coming on a day when Denmark’s Thomas Björn captured the Nedbank Golf Challenge at the age of 42.

Derek Lawrenson, Golf Correspondent of the Daily Mail and Chairman of the Association of Golf Writers, said: “The first Sunday in December proved a special one for European Tour stalwarts Thomas Björn and Miguel Angel Jiménez with their victories in South Africa and Hong Kong.

“Björn’s victory in the Nedbank Challenge propelled him to the cusp of a return to Europe’s Ryder Cup team, but it’s hard to argue with the sheer romance of Jiménez’s successful defence of the Hong Kong Open. He continues to confound all golfing logic in the most spectacular manner; America’s Golf Channel summed him up aptly when they called him the ‘world’s most interesting golfer’.

The European Tour Golfer of the Month Panel, comprising members of the AGW as well as commentators from television and radio, focus their attention on winning performances in The Race to Dubai on The European Tour International Schedule – Denmark’s Morten Ørum Madsen (South African Open Championship hosted by the City of Ekurhuleni) and South Africans  Charl Schwartzel (Alfred Dunhill Championship) and Dawie Van der Walt (Nelson Mandela Championship presented by ISPS Handa) were other contenders – while also taking into account performances worldwide.

Jiménez (December) will now be considered with the next 11 monthly winners for The 2014 European Tour Golfer of the Year Award which was won last year by Sweden’s Henrik Stenson.