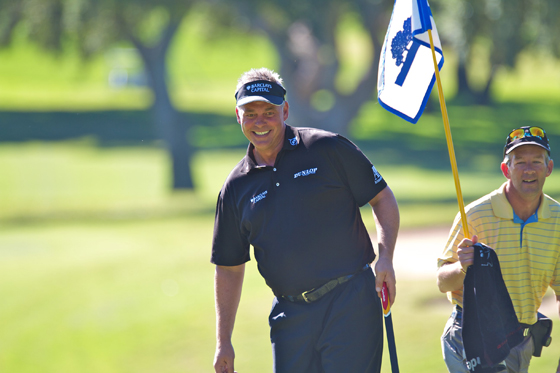 Northen Ireland’s Darren Clarke, current Open Champion with 18 international wins to his name, has confirmed his appearance at the Andalucía Masters, a European Tour event to be held at Club de Golf Valderrama from October 27-30.

43-year-old Clarke turned professional in 1991 and won his maiden European Tour title in 1993. Clarke has experienced high and lows, both in his career and in his personal life, mainly due to this wife’s illness. In 2006, two months after the unfortunate death of Heather Clarke, Darren received one of Woosnam’s wild cards for the K Club Ryder Cup and earned three points for Europe in one of the most emotional editions of the event.

Clarke, one of the most popular players in the game, is a passionate Ryder Cupper. He made his Ryder Cup debut at Valderrama under the captaincy of the late, great Seve Ballesteros, and has been on the winning team in four out of five appearances. In 2010 he was vice-captain to Colin Montgomerie at Celtic Manor.

In July, Darren achieved a lifelong dream: he took The Open Championship in his 20th attempt at Royal St. Georges by three shots from Phil Mickelson and Dustin Johnson. Such a long wait deserved a "very, very long" celebration.

Darren Clarke has formed a foundation aiming to “foster goodwill through the game of golf and to show children all over Ireland that golf is a great game, it’s a healthy game which promotes integrity and honesty and can be played by people of all ages.” Darren is also dedicated to raising money for breast cancer and awareness of the disease.

The current Open Champion, who rarely misses a Tour event in Andalusia, won the Volvo Masters at Montecastillo in 1998.

Darren, like many golfers, is a keen fisherman, he declares himself a Liverpool fan and, like his Andalusian friend Miguel Ángel Jiménez, enjoys good cigars, good cars and good wine. The hugely popular Northern Ireland golfer has even appeared on a postage stamp.

The Autonomous Government of Andalusia, owner of the tournament rights and its main sponsor, has entrusted Octagon, a well respected sports marketing company, with the organization of the Andalucía Masters.