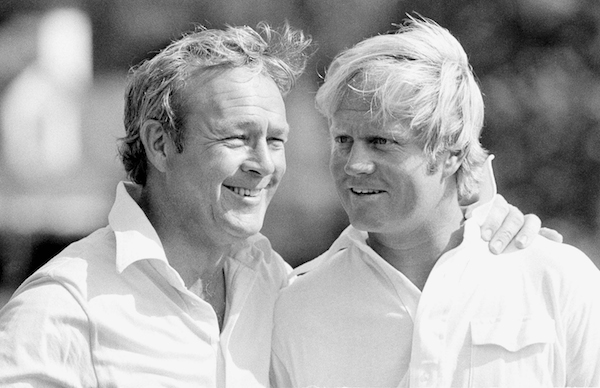 The duo made golf history at the Pittsburgh area course in 1962, when Nicklaus, 22, defeated Palmer in an 18-hole playoff to win his first major championship, and the first of four U.S. Open Championships.

“Golf fans cannot help but connect these two extraordinary players to Oakmont,” said Thomas J. O’Toole Jr., USGA president. “They are ambassadors for our game, and it’s only fitting that they serve together as we bring our ninth U.S. Open to this storied venue.”

Nicklaus was recently honored by the USGA with the opening of the Jack Nicklaus Room in the USGA Museum at the association’s Far Hills, N.J., headquarters. Beyond his record 18 major-championship victories and 120 professional wins worldwide, Nicklaus captured 73 PGA Tour victories as well as two U.S. Amateurs and two U.S. Senior Opens. In 1975, he won the Bob Jones Award, the USGA’s highest honor. He was awarded the Presidential Medal of Freedom in 2005 and the Congressional Gold Medal in 2015. The U.S. Open gold medal, given to all U.S. Open champions, was named the Jack Nicklaus Medal in 2012.

“Hopefully I don’t sound presumptuous, but I am sure both Arnold and I are extremely honored to be asked to serve in these roles,” said Nicklaus. “Oakmont has always been such a very special place to both of us, and it was the backdrop for one of our great battles on the golf course. The victory I was fortunate to take away from the 1962 U.S. Open was essentially the start of my professional major-championship career. That week at Oakmont also represented the start of a healthy career-long rivalry with Arnold, but far more important, the start of a lifelong friendship.”

With 92 professional victories and seven major championships, Palmer became the pride of Pennsylvania with his three USGA titles – the 1954 U.S. Amateur, 1960 U.S. Open and 1981 U.S. Senior Open. His long relationship with the association also includes the 1971 Bob Jones Award. The honorary chairman of the USGA Members Program since its inception in 1975, he dedicated the newly renovated USGA Museum and Arnold Palmer Center for Golf History in 2008 in Far Hills.

Among Palmer’s many career accolades, he was recognized with the Presidential Medal of Freedom in 2004 and the Congressional Gold Medal in 2012. He played in his 32nd and final U.S. Open at Oakmont in 1994.

“I have treasured Oakmont since I played there for the first time when I was just 12 years old,” said Palmer. “I certainly look forward to being back at Oakmont next year, even though I won’t be playing. It should be a great championship on the course as it now exists.”

In their honorary roles, Nicklaus and Palmer will support the 16th USGA championship to be held at Oakmont.

“Arnold and Jack are very much ingrained in the historic championship tradition of Oakmont Country Club,” said Robbie Hofmann and Bob Wagner, the club’s member championship chairmen. “We are delighted to have them serve as honorary chairmen of yet another memorable championship at our club.”

Spectator tickets for the 116th U.S. Open Championship are available at usga.org, along with corporate hospitality and other championship information.

Tickets now on sale for the Estrella Damm N.A. Andalucía MastersNews
28 July, 2021
Tickets are now on sale for the Estrella Damm N.A. Andalucía Masters, a golf event that will gather the best European Tour players at Real Club Valderrama from October 14-17. The Sotogrande gem,…
Aramco Team Series – Sotogrande to deliver yet another star-studded field as new $1million team format event continues to entice the world’s bestNews
28 July, 2021
The Aramco Team Series continues to prove a big draw for the world’s leading golfers as the LET today reveals a raft of international star-players heading to Sotogrande, Spain, for the second of…
Rahm in the hunt as Fitzpatrick and Detry lead in ScotlandNews
28 July, 2021
Thomas Detry and Matt Fitzpatrick take a one stroke lead over World Number One Jon Rahm into the final round of the abrdn Scottish Open, the second Rolex Series event of the season. Fitzpatrick…
Up to 32,000 fans to attend on each Championship dayNews
28 July, 2021
Following the UK Government’s announcement to delay the planned easing of restrictions, we are now actively working with the government and public health authorities, including those in Kent, in…