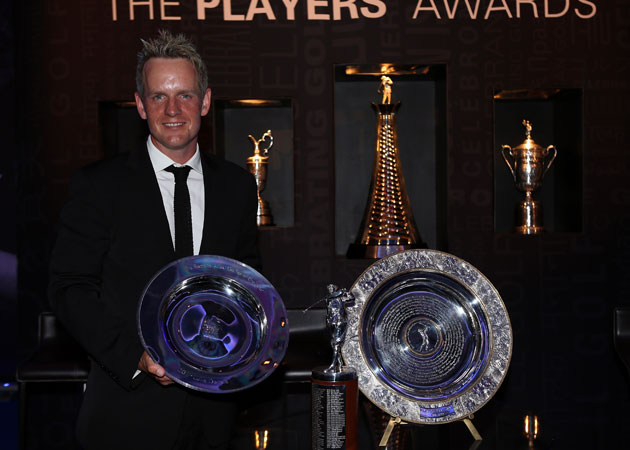 The great and the good of the golfing world were in attendance for the Players’ Awards Dinner at Sofitel Heathrow tonight as The European Tour celebrated another stellar year ahead of its flagship event, the BMW PGA Championship, being held this week at Wentworth Club…

George O’Grady, Chief Executive of The European Tour, welcomed guests from around the globe including stars such as Luke Donald – whose outstanding season last year included ascension to the World Number One berth and the capture of the Race to Dubai trophy – and the three European Tour Major Champions of 2011, Charl Schwartzel (Masters Tournament), Rory McIlroy (US Open Championship), and Darren Clarke (The Open Championship), for an evening of black-tie glitz and glamour.

O’Grady said: “Well they said the 2010 was the greatest season The European Tour has ever had from a playing view, now 2011 wasn’t a bad year either! When you think of the three Majors of [Charl] Schwartzel, [Rory] McIlroy, Darren Clarke in that wonderful performance at The Open Championship, and then of course Luke Donald’s achievements, I hardly think you can get much better.

“This is a great night for the players themselves, for all our sponsors, all our promoters and all the media. We are honouring Luke Donald, Rory McIlroy, Darren Clarke, and all of the others as well. But to have even just those three is something.

“The peak of the game is here from across the world; they want to come, their wives are here, it’s superb. It’s a glamorous event, we’ve got 450-odd guests from all over the world and it’s a great night to be part of The European Tour.”

The evening, co-hosted by the Golf Channel’s Steve Sands and Sky Sports’ Kirsty Gallacher, paid tribute to the once again superb achievements of European Tour Members in 2011, and began with Italian prodigy Matteo Manassero presenting England’s Tom Lewis with the Sir Henry Cotton Rookie of the Year Award.

Lewis, 21, stormed onto the golfing radar by winning the Silver Medal in The Open Championship at Royal St George’s – after leading following the first round – before securing his maiden European Tour title with a stunning performance at the Portugal Masters in what was only his third start as a professional.

“I didn’t expect it to be as heavy as it was, it’s a big trophy!” said Lewis. “It’s really special, I didn’t realise the night was as big as it was and it’s just amazing to be here.

“I was able to qualify for the Open and I got a great draw [with namesake Tom Watson] and it obviously kicked off from there. I think I’ll respect what I achieved at there more in the future when I look back, and hopefully in the next few years I’ll be able to come away after four rounds and say I was ahead of everyone else. And to win in Portugal in just three starts was obviously amazing.”

Following a video review of last season, attention turned to the Majors of last season, including Schwartzel’s seizing of the Green Jacket in the 2011 Masters, and in particular the achievements of two men from Northern Ireland.

Rory McIlroy, who had been so close to securing his first Major Championship scalp at the Masters before the aforementioned Schwartzel swooped in on a tumultuous Sunday, bounced back with a performance of breath-taking skill and incredible maturity to triumph in the US Open at Congressional with a record 16 under par total.

The Ulsterman’s tee shot on the par three tenth in the final round, a towering six iron that came to rest just inches from the pin, was recognised by fans of My European Tour as the Shot of the Year, an award presented by McIlroy’s close friend and compatriot Graeme McDowell – the man he succeeded as US Open Champion.

McIlroy said: “I think not just last year, but for the last few years The European Tour has been on a great run. I think starting with Padraig Harrington winning those Majors in 2007 and 2008 and then The Ryder Cup in 2010 and all the European success at the Majors, the Tour is just going from strength to strength and it’s great to see.

“Last year was a great year for me to get that first Major was a huge moment in my career and hopefully the stepping stone to many more. Since then I’ve continued my good play and climbed to the top of the World Ranking which is another huge milestone for me. It’s been a great 12 months for me.

“Of course we should be celebrating how good the game is at the minute. With having had four European guys at the top of the Ranking for a while in the last year, the tussle at the top for the Number One spot etc. It’s a great night to celebrate what The European Tour has evolved into over the last few years.”

The 23 year old was joined on stage for a Q&A session by his elder countryman Darren Clarke, who last July became the oldest Open Champion since 1967 in an emotional victory at Sandwich aged 42, undoubtedly the crowning glory of a glittering career for the Northern Irishman.

There were also accolades for Clarke’s renowned coach, Yorkshireman Pete Cowen, who was presented with a Special Achievement Award for his contribution to European golf.

Luke Donald, of course, scooped the biggest haul of the night, though, in recognition of a magnificent and prolifically successful 2011 season, as Germany’s Martin Kaymer awarded his Ryder Cup team mate with the Harry Vardon Trophy as the 2011 European Number One, the Golfer of the Year Award, and the Players’ Player Award as voted for by Donald’s contemporaries.

Over the course of the season, Donald won three times on The European Tour at the WGC-Accenture Match Play Championship, the BMW PGA Championship – a performance that took him to World Number One for the first time – and the Scottish Open, accruing a record €5,323,400 in an unbelievably consistent year.

“It was obviously a very special year for me,” Donald reflected. “To be Number One means a lot; it’s two years of really hard work being extremely consistent, obviously thrown in a bunch of wins like I have and it is something I am very proud of.

“You can’t fluke getting to Number One in the world and it’s something that’s very special to me and something I’ll tell my grand-kids in years to come, that I was once the best golfer in the world.”

Time was also taken to preview this Autumn’s showpiece in Medinah, The 2012 Ryder Cup, with a special video, and many of the European Tour stars that traversed the ‘Blue Carpet’ at the Sofitel this evening will have their eyes firmly set on the ultimate prize – one of those 12 much sought-after places in Captain José María Olazábal’s side in Chicago come September.

“It is very important to have nights like this,” said Olazábal. “We do this once a year and I think it’s great to celebrate all our accomplishments across the world.

“We’ve got big events coming up, starting with this week at Wentworth, Major events, World Championship events so it’s going to be important for the boys to play well from now on.”