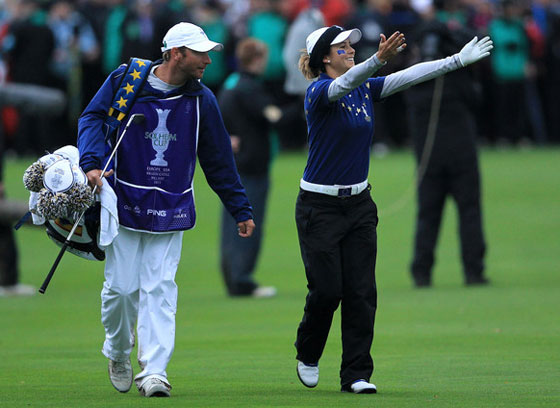 I don’t know where to start… This is crazy!…

It has been incredible: the best week of my life. Nerves, emotions, happiness… What a sensational team! How awesome they are…  Unforgettable.
We’ve won the Solheim Cup! Yes, we did it. At times it looked impossible, but we did it. Congratulations TEAM! Thank you, TEAM!
I want to tell you how I spent this past week and, more than anything, how it went on this nerve-racking Sunday…
The captain’s message during Saturday’s dinner was clear: the team competition is over. No more pairs. No more thinking about your teammate. Now you are alone and all you have to think about is winning your point. If you do that, we’ll win the Solheim Cup.
The second message came Sunday morning: do not peek at the scoreboard or do any math. But … I confess: I couldn’t help myself. I couldn’t stop looking at the scoreboard and I was using the calculator in my head, and I thought we wouldn’t win. The numbers didn’t work. I thought it was slipping away…
During the second game delay due to lightening, I was riding the cart with Suzann Pettersen and Caroline Hedwall, and I told Suzann that the afternoon was going south, that I was looking at the scoreboard and things didn’t look so good. She looked straight at me and told me: “Stop looking at the scoreboard. If the three of us win our matches, we’ll win the Solheim Cup.” And that’s the way it went down. It was incredible how Suzann won her match and how Caroline made her half point. It seemed impossible!
I knew I had to win my point if we were to have a chance. I went to the 17th hole convinced that I needed a birdie. I had to win the hole. All week, when I walked the course between shots, I was very nervous, but over the ball I always felt very comfortable.
It’s been a great week with the team. We have enjoyed it very much. We had a lot of fun. Living together has been fantastic. We were singing in the bus, playing games… I think this atmosphere has been key for my playing well.
But let’s go back to 17. For my second shot I had 111 meters to the flag with wind from right to left. I decided to hit a soft 8 iron, with a low flight to avoid the wind. And it came out perfect. When I saw the ball flying and knew it was going good, I didn’t know whether to say to it ‘fly, fly!’ or ‘cut, cut!’ So I just said “Please, be good…”
The putt left was less than half a meter, but I thought that my heart was coming out of my mouth. I don’t even know how I hit that ball. At that moment, I didn’t know we were ahead. I heard a big roar from the 18th hole, but I wasn’t sure, because there were a lot of American fans.
After hitting the ball on the 18th tee, I saw a crowd running toward us. They were screaming that we had won the Solheim Cup and they all told me that I had been decisive. It’s been crazy, incredible. I don’t even know how I was able to play my shot to the green and make the putt, because nothing really mattered anymore.
I’ve never dreamed that I would be in a situation were I would be playing in the last match of a Solheim Cup. If I think about it, I panic. During our dinner on Saturday, when the captain told me that I would be playing in the next to last match, I got a little nervous. That was a lot of pressure! What if my point turns out to be decisive to win or lose the Solheim Cup? All the team depending on me, the players, the captains… I talked to Suzann about it and what she told me helped me a lot: “If the captains placed you in the next to last match it’s because they know you can do it. They know you can stand the pressure and that you can win the point.” I never thought of it that way and her comment gave me a lot of confidence.
Our celebration has been amazing. The photograph of Severiano that you’ve seen around was in our locker room all week. We watched again the video tape that Seve sent for the Solheim Cup team in 2009 in Chicago. It was very emotional. I don’t know what the future holds, but I had a lot of fun this week and I hope I can come back another year.
I don’t want to say good bye without thanking everyone that came to Ireland to support the team and to all of you that supported us from home. Thank you from the bottom of my heart!
I have to go now. There is a party waiting…