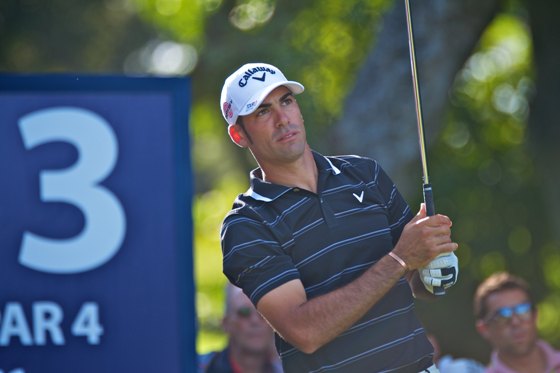 Álvaro Quirós, the first world-ranked Spaniard, has confirmed his appearance in the second edition of the Andalucía Masters, from October 27-30 at Club de Golf Valderrama…

Quirós could not miss the Valderrama event, a course he knows inch by inch, located a few minutes away from his home. Long-hitting Quirós, who has never performed well in front of his home crowd on this prestigious layout, feels that he has “something to prove”. “My statistics are terrible, I only made one cut in 2008, but I’m determined to change things. I look forward to playing at home, with the support of my family and friends, and hopefully this time I will give them reasons to cheer”.

In the five years since he turned pro, the Spaniard has claimed one victory per year,  the last at the 2011 Omega Dubai Desert Classic, where he carded a hole-in-one that won the European Tour Shot of Month for February.

Álvaro enjoyed a good start to the season – he finished 8th at the Volvo Golf Champions in Bahrain, 2nd in Qatar, he led the first day at Augusta and was 5th at the Volvo World Match Play.  This summer, knee and wrist injuries have kept him away from competition for seven weeks. He made his comeback at St Andrews a fortnight ago.

Quirós is currently ranked world 42, having lost 10 places due to his wrist problems, but he aims to move into the world's top 30 before the end of the season. A good result at the Andalucía Masters which has a 3 million euro purse, could move him up in the rankings.

The Autonomous Government of Andalusia, owner of the tournament rights and its main sponsor, has entrusted Octagon, a well respected sports marketing company, with the organization of the Andalucía Masters.