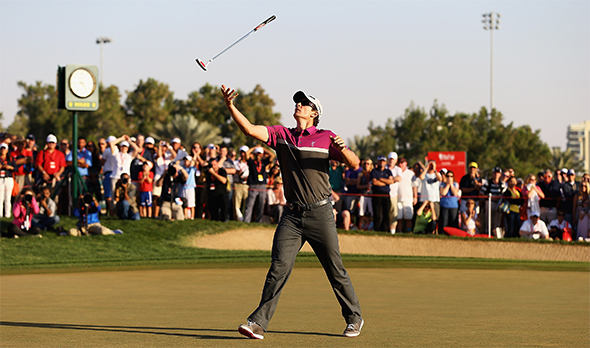 Ryder Cup hero Justin Rose said it would be “like a dream” if he wins the 2015 Abu Dhabi HSBC Golf Championship in its tenth year.

Rated as one of the best players in Europe’s Ryder Cup triumph at Gleneagles recently, Rose is now turning his attention to new goals and plotting his campaign for the 2015 season which will start at Abu Dhabi Golf Club on January 15.

The Englishman came close to clutching his first ever Falcon Trophy in 2013, and with a two-stroke lead against another world-class pack, he looked destined for victory.

But on an enthralling final day, Jamie Donaldson had five birdies and did not drop a shot until the final hole to finish 14 under. Rose had a chance to force a play-off with Donaldson, but his birdie putt lipped out of the cup, giving the honours to the Welshman.

“That’s a putt I don’t think I’ll ever forget,” said Rose, who is returning to Abu Dhabi for the second time.

“As a kid growing up, the big dream for me was to become one of the best golfers in the world and I’ve learnt along the way there are always going to be highs and lows in this sport.

“I used to dream about winning big tournaments, playing in Ryder Cups, and of course you dream about sinking putts to win the Open Championship. Success doesn’t come easily and you have to put the hard work and dedication in, but the most important thing for me is to start with a dream.

Rose added, “Winning a Major championship has always been my goal, and I have to say, winning in Abu Dhabi in its tenth year would also be a dream”.

Rose, the current world number six, won the most points and was regarded by many pundits as the best player of this year’s Ryder Cup. He forged an impressive partnership with Swede Henrik Stenson, playing the match of the tournament in the fourball to sink 10 birdies in a row together, and he fought back superbly against Hunter Mahan to halve his singles match.

His stunning Ryder Cup form follows almost 18 months after winning the U.S. Open at Merion Golf Club by two strokes over Phil Mickelson and Jason Day to become the first English player to secure a major since Nick Faldo in 1996.

“Justin is a great competitor and we know he would love to win in Abu Dhabi after going so close in 2013,” said Sultan Al Dhaheri, Acting Executive Director Tourism, Abu Dhabi Tourism & Culture Authority (TCA Abu Dhabi), which owns and organises the Championship.

“He’s an extremely popular player and we love having him here. We are working hard to make the tenth anniversary of the Championship one of our most memorable ever events, and welcoming Justin back to Abu Dhabi adds to the overall anticipation.”

HSBC Global Head of Sponsorship & Events Giles Morgan said: “We are thrilled to be welcoming Justin Rose back to Abu Dhabi in January.  The tournament has come a long way in the last ten years and Justin is part of a world class field taking part in a world class event. As the jewel in the crown of Middle Eastern golf, the Abu Dhabi HSBC Golf Championship is one of the early highlights of the golfing calendar and an unmissable family event”.

Tailored package details for the 2015 Championship, held from January 15 – 18, are available from www.golfinabudhabi.com. Championship packages include five nights’ accommodation in one of Abu Dhabi’s leading hotels, two rounds of golf on Abu Dhabi’s Championship courses, season passes to the Abu Dhabi HSBC Golf Championship as well as an array of stunning tourism attractions. To top this off, all those who book packages will enjoy a complimentary clinic with a world top 30 player.

Horschel claims Rolex Series glory at WentworthNews
23 September, 2021
Billy Horschel made a stunning closing birdie to fulfil one of his great golfing ambitions and win his first Rolex Series title at the 2021 BMW PGA Championship. The American watched the event on…
Countdown begins to 2023 Solheim Cup at Finca CortesinNews
23 September, 2021
The countdown is underway to Finca Cortesin hosting the biggest team competition in women’s golf, with all roads pointing to Spain for the 2023 Solheim Cup. The most talented players from…
Real Club Valderrama, a forge of championsNews
23 September, 2021
For almost 35 years, the European Tour and Real Club Valderrama have set up one of those successful pairings that empower and reinforce each other, and this association has yielded a notable list of…
Steve Stricker Completes U.S. Ryder Cup Roster for 43rd Ryder Cup with Six Captain’s PicksNews
23 September, 2021
United States Ryder Cup Captain Steve Stricker today announced that Daniel Berger, Harris English, Tony Finau, Xander Schauffele, Scottie Scheffler and Jordan Spieth have been added to the U.S. Team…