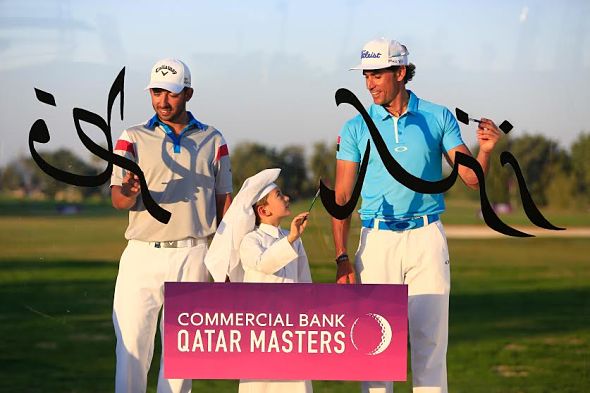 Spanish stars Rafa Cabrera-Bello and Pablo Larrazabal sampled a little local culture at the Commercial Bank Qatar Masters after receiving a lesson in Arabic calligraphy at the end of the second round at Doha Golf Club.

“It’s nice to try things like this. It’s fun,” said Cabrera-Bello, who has twice finished third at the tournament, including last year when he missed the playoff by one shot.

As Sergio Garcia continues a sold defence of his title with a second 69 and Alejandro Canizares featured in the top 10 on Thursday, Cabrera-Bello explained why he and many other Spanish stars enjoy the US$2.5 million tournament, which sits at the heart of The European Tour’s desert swing.

“It’s just like back home. It’s sunshine normally, a little breezy, we play in short sleeves and I kind of like that the fact that there’s sand all around,” said Cabrera-Bello, a two-time European Tour winner.

The Spaniard considers the Commercial Bank Qatar Masters one of his favourite tournaments and said he has always felt at home on the Doha Golf Club’s Peter Harradine-designed layout.

“I think it’s a long hitter’s course,” he said. “I’m not the longest hitter, but I would consider myself one of the longer hitters. I also like it because there’s a lot of wedge play if you’re driving well and my wedge play tends to be good. As well as those things, the course suits my eye. The first time I came here, I liked it and I’ve enjoyed myself every time I’m here.”

Rafa was in second place after his first-round 66 and after a second-round 73, he remains just four shots off the lead and determined to again be in the mix for the final round.

“I’ve been close a couple of times, had a couple of top-threes here,” he said. “It’s one of my flagship events and I know I can do good here. I just want to have a good round on Friday and put myself in position for Saturday.”

Commercial Bank Qatar Masters tickets are available to purchase at Doha Golf Club, Virgin Megastores (in stores in Doha and online) and the Doha Rugby F.C. Each ticket purchased entitles the holder to one free return drive to the event at Doha Golf Club by event partner UBER. Entry is free for children under 14 years of age. Commercial Bank Qatar Masters tickets for adults are priced as follows: