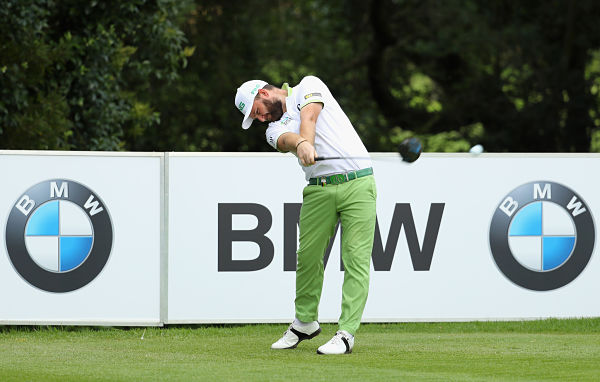 Andy Sullivan admits he may never be Mr Universe but is hopeful better physical preparation can help him get 2017 off to a flying start at the BMW SA Open hosted by City of Ekurhuleni.

The Englishman won his first European Tour title at this event in 2015 and has never looked back, claiming two more trophies that season and making his Ryder Cup debut in 2016.

He now returns to Glendower Golf Club in his usual high spirits as he starts his 2017 campaign, and insists he has never been better prepared for a new season having focussed on both his mental and physical fitness in the close-season.

Sullivan will need every advantage he can get if he is to add another BMW SA Open title to his CV, with World Number Two Rory McIlroy headlining a strong field for the first European Tour event of 2017.

McIlroy is in town to support his great friend Ernie Els, who is the tournament host this week. The two have developed a great friendship over the past eight years, with McIlroy playing this week’s tournament after the 47 year old played the Dubai Duty Free Irish Open Hosted by the Rory Foundation in 2015.

Among the other notable names in the field is defending champion Brandon Stone, who not only won this event 12 months ago but also won his last European Tour event – the Alfred Dunhill Championship – in December.

There are also some truly legendary names at Glendower Golf Club this week, with Els being joined by countryman Retief Goosen, Northern Ireland’s Darren Clarke and England’s Sir Nick Faldo.

Andy Sullivan: “I am really looking forward to this week. It’s always nice to come back to somewhere you have done well in the past, and then to get away from the crappy weather back home is also a nice bonus and makes a big difference to practice. I think this is the best ever prepared I have been to start a year. I have done a lot of gym work this year and have really looked after myself physically and mentally and that has paid off coming into the new year.

“Flexibility has been a massive thing for me. I have worked hard on that. I have been liaising between my golf and fitness coaches and bringing them more together so the two things are related. If there are certain positions my golf coach wants me to get into then I can work on the stretches with my fitness coach to make that a bit easier. I think that is why Goughie (Jamie Gough), my golf coach, has seen improvements even though I haven’t hit a lot of balls. So little things like that have really helped. It’s all really light stuff – I am not bulking it up or anything. I’m not going to turn into Mr Universe or anything like that!”

Rory McIlroy: “I first played with Ernie at the Singapore Open in 2008 and my caddie JP caddied for Ernie before me so we have always had a decent relationship. Ernie was the first big, big name I had played with as a pro. I was nervous but I remember teeing off the tenth tee and I hit three wood past his driver and I thought ‘this is alright!’

“I always remember that and also the fact that Ernie lost to Jeev (Milkha Singh) in a play-off that week and we were part of the same management company so we went out that night for dinner and a few drinks and had a great time. That was the beginning of the relationship and it’s kind of continued from there. I have always been a huge fan of his game but I am a bigger fan of the man and to have been able to get to know him and Liezl and the kids over the past few years in Florida has been great. Anything I can do to help Ernie I always will. I actually named my first dog after Ernie – I called him Theo. It’s been a good relationship.”

Bland wins maiden title in 478th appearance at Betfred British MastersNews
18 May, 2021
Richard Bland claimed an emotional first European Tour victory in his 478th appearance after the English veteran overcame young Italian Guido Migliozzi in a play-off to win the Betfred British…
European Tour, Ryder Cup Europe and Two Circles create Tour Consumer ExperiencesNews
18 May, 2021
The European Tour and Ryder Cup Europe today announced Tour Consumer Experiences, an 11-year strategic venture with industry-leading sports marketing and data technology company Two Circles. …
Higgo powers to another win on the CanariesNews
18 May, 2021
Garrick Higgo continued to write his own chapter in the European Tour history books as he powered to a second win in three weeks at the 2021 Canary Islands Championship. Just 14 days after he…
Race to Costa del Sol returns in South AfricaNews
18 May, 2021
A new Ladies European Tour (LET) season gets underway next week with the Investec South African Women’s Open at Westlake Golf Club, the first event on the 2021 Race to Costa del Sol. The Race…