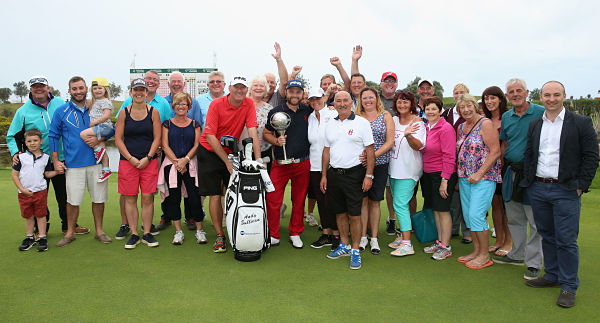 Andy Sullivan will hope to mark the tenth anniversary of the Portugal Masters with a successful title defence after the Englishman confirmed his return to the Oceânico Victoria Golf Course from October 20-23.

Fresh from securing an automatic qualification spot in the European Ryder Cup Team bound for Hazeltine National in late September, the 30 year old is excited to have his friends and members from his local golf club – dubbed the ‘Sulli Army’ – joining him in the Algarve.

“It will be nice to go back to Portugal to try put up a stellar defence and regain the title, especially with 70 members of my golf club coming out,” he said. “With any luck the crowds will be cheering me on and getting behind me, and hopefully that will inspire me to go on and do it again.”

Sullivan’s winning total of 261 was the lowest in the history of the Portugal Masters. The Nuneaton native came into the final round with a five-shot lead, and a closing 66 extended that to nine strokes as he finished the week on 23 under par to secure the third European Tour title of his career in emphatic fashion.

“For me to go there and win in the manner I did, in front of my mum and my dad, and a load of family and friends, it was just absolutely awesome,” he said of the record-breaking week.

“I couldn’t have dreamed that I would have won by as many as I did, so it was an incredible feeling and nice to share it with the people you are so close to as well.”

Sullivan speaks fondly of one of his favourite events on the European Tour, the course and relaxed atmosphere in Portugal clearly appealing to his laid-back personality.

“It’s a fantastic location, the Tivoli Hotel on site is absolutely beautiful and with the marina around the corner, it’s a real hot spot for people to go on holiday and enjoy the golf course as well,” he said.

“For me over the last few years, it’s been a great opportunity to take the family out there, it’s very relaxed and an enjoyable golf course to play, you can get low numbers out there but to have the family close, that’s what I absolutely love about it.

“The government really get behind it and show a lot of support to put on a great tournament, which is really nice to know because a lot of the guys on tour really enjoy playing there.”

Last year’s victory saw Sullivan become the ninth different player to win the Portugal Masters from the nine times the event has been played.

“I had a game plan to make the lead as big as possible, play as aggressive as I had all week and it worked for me. I played really well, went bogey-free on the final day and managed to extend the lead even more,” he said.

“I think the guy who plays the best golf during the week generally wins there, sometimes you don’t always get that on some courses but the Oceânico Victoria seems to provide that.”