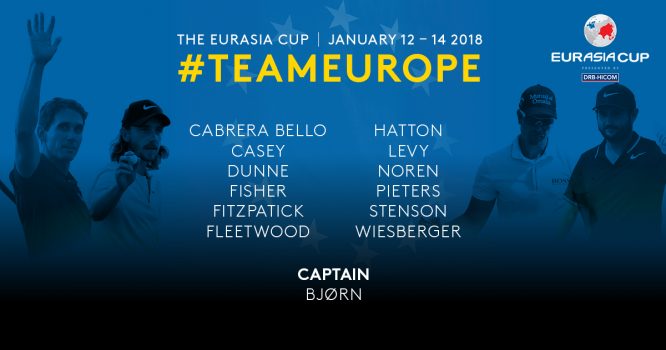 A full house of 12 European Tour winners, incorporating the 2016 Open Champion and six Ryder Cup players, make up the European Team named today for next year’s EurAsia Cup presented by DRB-HICOM in Malaysia.

Led by Thomas Bjørn – eight months before he also captains Europe in The Ryder Cup in France – the European Team will tackle Asia in the third staging of the biennial contest, which will once again take place at the Glenmarie Golf and Country Club in Kuala Lumpur from January 12-14, 2018.

Europe will be looking to retain the trophy they won in convincing fashion by 18 ½ – 5 ½ in 2016, but will face a strong Asian team on home soil captained, for the first time, by India’s Arjun Atwal.

Leading the ten automatic qualifiers from the 2017 Race to Dubai Rankings presented by Rolex is Englishman Tommy Fleetwood, who finished European Number One after a thrilling end to the season last weekend at the DP World Tour Championship, Dubai.

Casey will bring vital experience of the match play realm through his Ryder Cup appearances which included being part of Europe’s back-to-back nine-point triumphs in 2004 and 2006, while Levy will bring his own particular brand of French flair, with golf fans in his home country hoping that he can go on to become the fourth Frenchman to play in The Ryder Cup in his home country next September.

Captain Bjørn, who played in the inaugural EurAsia Cup match in 2014 which ended in a 10-10 tie, said: “The interest from the players has been very strong and you can see that from the fact that the ten automatic qualifiers come from within the top 20 of the final Race to Dubai Rankings. That is a good indication of what the EurAsia Cup is becoming, and I think European golf is in a great place right now.

“I’m very encouraged by the make-up of the team and we are strong from 1 through to 12. I have some great experience in terms of six players who have experienced Ryder Cups, as well as the 2016 Open Champion in Henrik. But I also have some exciting young talent led by Tommy and Tyrrell.

“Obviously Tommy has had an amazing year and deserved to be crowned European Tour Number One last weekend. But Tyrrell has also had a great season, the highlights of which were his back-to-back wins in the Alfred Dunhill Links Championship and the Italian Open last month.

“As captain, I am looking forward to seeing how all 12 deliver on this particular stage. It’s a different kind of format to what they are used to week‑in, week‑out, so it will be interesting to see how they react to that environment.

“It’s a great honour for me to be captain and I’m looking forward to going to Malaysia in January to face what I know will be a very strong Asian team. We want to win the EurAsia Cup again and I believe we are going with a team very capable of doing that.”

Captain Bjørn also expanded on the reasons behind choosing Paul Casey and Alex Levy as his two wild card selections.

“It was a really hard task because there are so many good European players to choose from,” said the Dane. “All have legitimate claims and all are well qualified to be on this team, so it was a tough choice to have to make. But in the end, I went for Paul and Alex.

“Once Paul announced he was rejoining the European Tour, and therefore making himself available for selection, that decision was a no-brainer for me. He is a wonderful player with a lot of experience and I think the young guys can learn a lot from him.

“He’s also got a fantastic match play record and not just in Ryder Cups. He is comfortable with where he is in his life right now and him wanting to part of the EurAsia Cup team also shows his commitment to the European Tour and the road he is now on.

“Following on from that, I picked Alex as he is a player that has impressively risen through the ranks in the past few years. He has wonderful French character and flair as well as a lot of attitude and passion for the game. He is also very consistent which can be a great asset in match play.

“I have assembled a team which will hopefully go out and retain the EurAsia Cup, but I also have one eye on next September and selecting Alex will give him a feeling of being part of what a team event feels like, as I know it’s very much on his mind to try and make The Ryder Cup Team.

“Therefore, to get him into the fold, help him develop, and give him great opportunities for the future is important. But this is also deserved for what he’s delivered over the past couple of years. He got very close to qualifying for the team automatically and I think he definitely deserves his chance.”

The line-ups for the third EurAsia Cup will be completed on Tuesday November 28 when Arjun Atwal names his Asian team.