Tengolf
GLOBALAMÉRICA
Inicio News Tiger guaranteed his presence in the America´s Golf Cup in the next...
Compartir 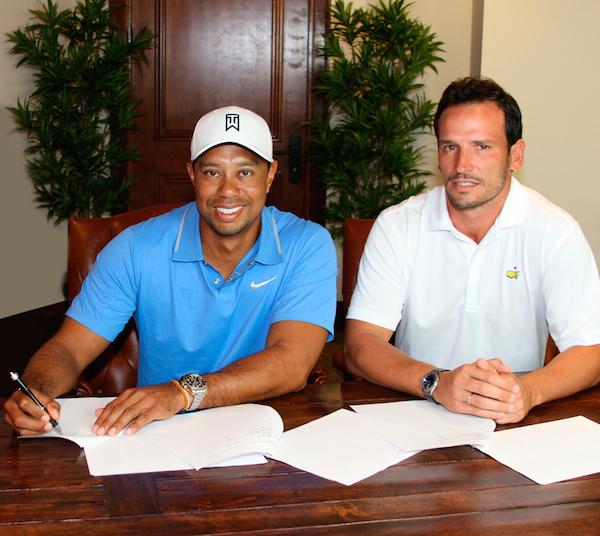 Tiger Woods, the biggest winner of the last 20 years in the PGA TOUR, committed to participate in the Bridgestone America’s Golf Cup presented by Value in 2016 and 2017 editions of the event. Thus, the relationship between Tiger and the event is extended to three years, since he will play with Matt Kuchar this year at the Club Campestre of Mexico City. Therefore, the presence of Tiger Woods is guaranteed for the next two years of the tournament.

Lisandro Borges, CEO of the event, confirmed the agreement with Tiger and he emphasized the importance of the agreement with Woods, and said: “this is great news for golf in the region, we will be able to enjoy the best player of all times in the next three editions of our tournament.”

As regards the venues of the Cup for the next two years, Borges said: “many prestigious resorts and golf courses in countries such as Colombia, Peru and the United States have expressed great interest in having our event for the next two editions with Tiger. We are at still negotiating; we cannot make any announcements yet.”

After the first edition´s astounding success, the Bridgestone America’s Golf Cup presented by Value will be played from October 22nd to 25th and will be part of the 2015 PGA TOUR Latinoamérica Schedule with a purse of U$D 300,000, that is one of the highest in the region. Latin American expectations to see Tiger are very high and he will return to Mexico after inaugurating, at the end of 2014, his first golf course design in the region: El Cardonal, in the luxury resort Diamante in Cabo San Lucas. The last time Woods played in Latin America was in 2000 when he teamed up with David Duval for the World Cup WGC in Buenos Aires.

This will constitute an excellent opportunity for Mexican golf to continue developing and the fans will have the chance to watch compete the Mexican team: Carlos Ortiz (PGA TOUR player) and Rodolfo Cazaubon (No 1 in the Order or Merit of the PGA TOUR Latinoamérica). At present, Mexico hosts events of the most important global tours: PGA TOUR (OHL Classic at Mayakoba), Web.Com Tour (El Bosque México Championship) and PGA TOUR Latinoamérica (Mazatlán Open, Abierto Mexicano de Golf and Bridgestone America´s Golf Cup presented by Value).

ANA Inspiration the first Major of 2021 celebrates 50th anniversaryNews
1 March, 2021
The 50th edition of the ANA Inspiration will take place April 1 - 4 at Mission Hills Country Club, Rancho Mirage, California, marking a return to its usual position on the calendar as the first…
PGA of America to allow for use of distance-measuring devices during its Major Championships, beginning in 2021News
1 March, 2021
The PGA of America today announced that, beginning in 2021, the use of distance-measuring devices will be allowed during competition rounds at its three annual Major Championships: the PGA…
Dominant DJ claims second Saudi triumphNews
1 March, 2021
Dustin Johnson earned his second Saudi International powered by SoftBank Investment Advisers title in three years after holding off the chasing pack to secure a two-stroke victory at Royal Greens…
Johnson pulls clear of Perez in SaudiNews
1 March, 2021
World Number One Dustin Johnson finished with back-to-back birdies to take a two shot lead into the final round of the Saudi International powered by SoftBank Investment Advisers as he attempts to…