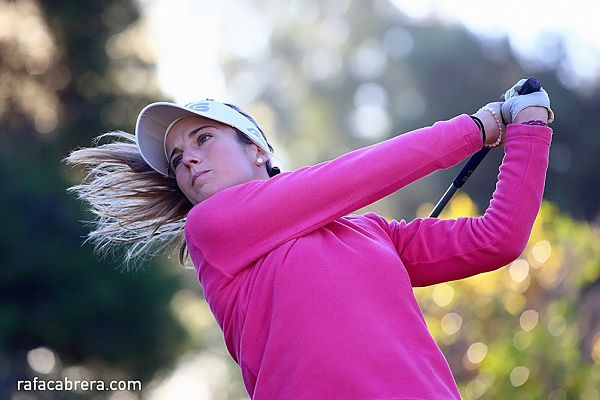 Noemí Jiménez, “made in” Guadalmina and Arizona state, one of the world’s leading amateurs and the winner of several tournaments in the highly competitive United States university leagues… Annabel Dimmock, the top-ranked amateur in the British Isles in 2014 and a Wentworth scholar… Carmen Alonso, one of the finest strikers of the ball on the Ladies European Tour… Laura Cabanillas, a multi-champion on the Banesto Tour and European Tour player… Lauralie Migneaux, a French star who oozes quality in every round she plays. They are just some of the female golfers – both amateur and professional – who are competing on this season’s Gecko Tour, a circuit where the women are shining brighter and brighter.

We don’t have to go too far back to see just how important women’s golf has become on The Gecko Tour. One week ago, in the fourth event of the season held at Marbella Club Golf Resort, Noemí Jiménez finished fourth, just two shots behind Mark Tullo, a regular on the European Tour and Challenge Tour. And this past Thursday, in the final round of the leg played at Atalaya Golf and Río Real, she was in even better form, rising to second place only three strokes adrift of the Chilean. This shows the growing strength of the women’s contingent.
Next week the Gecko Tour will have another star signing. Making her Gecko debut at Finca Cortesín and San Roque Golf Club will be Nuria Iturrios, a Balearics golfer based in Madrid who won this year’s Spanish national championship and turned pro in September. She will be taking advantage of Europe’s premier winter circuit to prepare for the Ladies European Tour Qualifying School in Morocco in December.

Joining her for the tournament at Finca Cortesín and San Roque will be Norway’s Rachel Raastad, a professional who this year competed in the LET Access Series and who will also be teeing up at the final of the LET Qualifying School in December.

So far this season, in five Gecko Tour events, 14 female golfers have competed alongside the men in a determined effort to take home the winning trophy, In addition to Jimenéz’s stunning performances, other highlights have included Lauralie Migneaux making the cut at Santa Clara and Marbella Golf Country Club and Torrequebrada, and a record five participants this week in the Gecko event at Atalaya and Río Real.