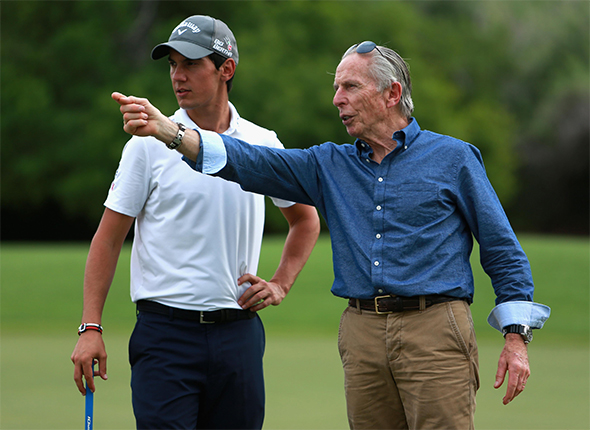 The world’s best golfers will face a tough start to 2015, with a series of course enhancements at  Abu Dhabi Golf Club’s National Course  promising the most challenging test yet for January’s annual Abu Dhabi HSBC Golf Championship.

After previous work on tightening fairways, adding bunkers and toughening the rough, 2015 brings water into play for the Championship’s 10th anniversary outing

On each of holes 2, 4 and 12, the National’s agronomy team has made significant green changes to the shape and size of the respective greens to bring them closer to the water hazards. These changes make it possible for new Championship pin positions that will potentially enhance the course’s degree of difficulty, throwing up a sterner test for the pros and a more exciting spectacle for fans.

Hole 16 has also seen major change, with the two left-hand bunkers replaced by four pot bunkers and the fairway moved to the right – closer to the water.

“Every year we bring something new to the course,” said Andrew Whittaker.  “For the 10th anniversary Championship, we needed something special.  These enhancements make it harder for the players, while adding to the drama for spectators.

“Abu Dhabi’s National Course plays around some beautiful water features but this time, for the pros, they are more than just scenery.”

The changes to 2, 4, 12 and 16 are just the most obvious elements of a major course enhancement programme.  Whittaker’s team has also fine-tuned tees, fairways, rough and greens to have the most formidable 18 holes ready when the world’s best tee-off on 15 January.

Matteo Manassero, who visited Abu Dhabi yesterday for a sneak preview of the enhanced course, welcomed the changes.  “Every year, this course gets just that little bit harder,” he said.  “It’s one of the reasons we players love to come back again and again.

“I can’t wait to get out there for real!”

Peter German, the Championship’s tournament director, says the National Course is almost unrecognisable compared to its first hosting in 2006, after ten years of design improvements.

“Every year there have been improvements to the course and it has now matured into one of the Tour’s best destinations.

“With every change, we’ve asked ourselves two questions.  Does it make it harder, more testing for the players? And – critically – does it increase the drama for the tens of thousands of fans who come here each year?

“The results speak for themselves.”

The changes for next year aren’t limited to on-course enhancements.  The ever-popular Championship Village, packed with attractions and competitions, is also being extended.  Additional space will allow more seating and more shade, allowing fans and families to enjoy all that is on offer.

The wide range of casual eateries and family-friendly entertainment will be augmented by unexpected appearances and activities by other sporting legends, including the likes of Tim Henman, in the HSBC World of Sport, where fans can test their skills at a huge number of sports, from tennis to rugby to cricket.