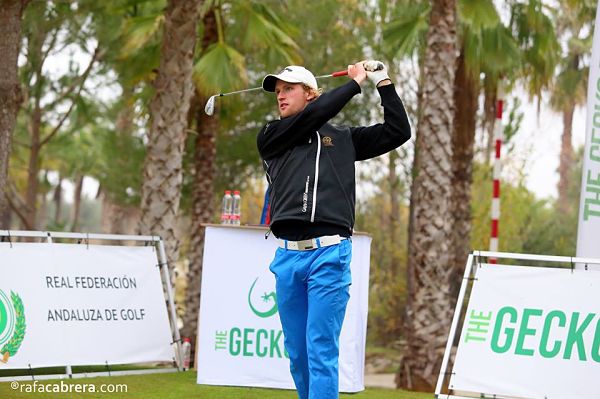 Just two days after playing in an exciting, fierce tiebreak at Lauro Golf, William Nygard and Sam Connor will go head to head this Thursday once again at Torrequebrada, in the eighth tournament of the Gecko Tour. The Swedish and English golfers lead a very international turnout including Andreas Andersson, winner of the opening tournament of the Gecko held at La Cañada.

More than fifty golfers will come together over the next two days with the objective of conquering the last victory of the year in the Gecko Tour. After Torrequebrada, the best winter tour in Europe will take a short break due to Christmas festivities. What better Christmas gift than a good win. At least that’s what’s on the majority of the golfers’ Christmas lists to Santa Claus. Keep a close eye out for Canadian golfer Brayden Eriksen as well. He’s a regular in the Gecko and he’s already proved that he’s good on this course right in the heart of the Costa del Sol. In last year’s tournament, which was the opening event, the American golfer finished in fourth place, however quite far from the sensational Marcus Kinhult, winner who currently holds the European Tour card.

We’ll also follow the amateurs closely. Powerful presence. None other than thirteen players, of which Swiss golfer Marc Sporri stands out the most in the pack.

Torrequebrada is prepped and ready for the next Gecko tournament. Ready to do things well, because the next tournament isn’t until January 9th of the new year, which will be held at the Parador in Málaga. The first game this Thursday will start at 8:45 am and the last at 11:25.

Things are looking bleak for Real Madrid fansNews
25 May, 2020
Hello everyone, nice to see you here again in the Rondo, by Sergio García So, a few weeks have passed, and there’s a lot to talk about. Unfortunately, as a cynical Real Madrid fan, despite the…
Campillo and Sullivan share lead in DohaNews
25 May, 2020
Jorge Campillo and Andy Sullivan shared the lead heading into the weekend at the 2020 Commercial Bank Qatar Masters but they had a host of European Tour winners breathing down their necks at…
European Tour statement on the Magical Kenya OpenNews
25 May, 2020
Due to the threat posed by the spread of the Coronavirus (COVID-19), the Government of Kenya has this morning advised of their decision to postpone all meetings and conferences in the country of an…
Ryder Cup stars ready for Valderrama returnNews
25 May, 2020
Ryder Cup heroes Thomas Bjørn and Lee Westwood will return to the venue where they made their debuts in the biennial contest between Europe and the United States, confirming they will tee it up in…
The latest ...
Things are looking bleak for Real Madrid fans
News
12 March, 2020
Campillo and Sullivan share lead in Doha
News
6 March, 2020
European Tour statement on the Magical Kenya Open
News
6 March, 2020
Ryder Cup stars ready for Valderrama return
News
4 March, 2020
ANA Junior Inspiration gives 48 junior golfers from around the world opportunity of a lifetime
News
3 March, 2020