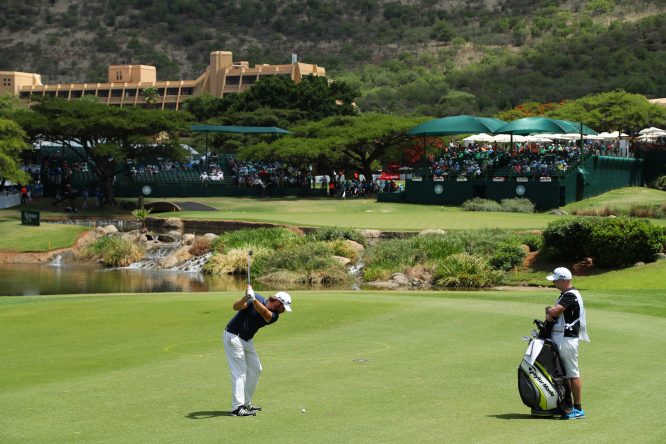 Victor Dubuisson opened up a two-shot lead after a weather-affected second day of the Nedbank Golf Challenge hosted by Gary Player.

The first round of the seventh Rolex Series event of the season had been played in calm, sunny conditions, but it was a different story on Friday with strong gusts testing the players and storms causing delays totalling two hours and 28 minutes.

The sun was setting over Gary Player Country Club when the last group holed their final putts, with Frenchman Dubuisson completing a 70 to get to six under par and lead the way from local favourite Darren Fichardt and two-time champion Lee Westwood of England.

Dubuisson has an incredible record at this time of year, with two wins at the Turkish Airlines Open, two top five here and three top fives at the DP World Tour Championship, Dubai since 2013.

Englishman Westwood won this event back-to-back in 2010 and 2011 while a victory for late-entry Fichardt would be a remarkable result for the man who only made his tee-time on Thursday with minutes to spare after Anthony Wall’s withdrawal.

Victor Dubuisson: “The driver here is the key if you want to play well, and today I didn’t miss many fairways, maybe one or two, and I played very solidly in the wind.

“I just try to play as good as I can each day, day after day, and especially on this course, you’ve got to have a very solid game to do get good scoring.

“It’s the goal of the week to play in Dubai because it’s been five years in a row that I’ve played the Dubai final. So of course I think about it.”

Darren Fichardt: “I was quite flabbergasted on the first nine yesterday and quite drained on the second nine. I still can’t believe I’m playing.

“I had no time to think about this tournament. Wednesday I was still thinking what else I was going to do on Thursday, maybe playing in a couple competitions with my friends on Friday. I’m here, two days into it, and doing pretty good. So I’m pretty happy.

“Today, you’ve just got to take what you can get. All you can do is pick a shot you want to hit, commit to it, and if it doesn’t work out, what can you do. But you’ve got to obviously make sure if it does gust, you’ve still got a chance to get up-and-down. That’s why I wasn’t taking on flags today because in case the gust comes up and then you’re in really big trouble. So just got to really think your way around and minimise mistakes.”

Lee Westwood: “Other than four three-putts, I played very well. I hit it close a lot. That showed the quality of the long game, because I think that’s probably one of the toughest days I’ve ever experienced on this course tee-to-green with the wind.

“Experience is everything around this golf course. There are some pins that you just can’t go at and you have to play away from. When you miss them, you realise you’ve made a mistake with your course management.

“I’ve been coming here since 1998 and played it a lot and been successful around it. The harder the conditions, the better it will be for me over the course of the week.”