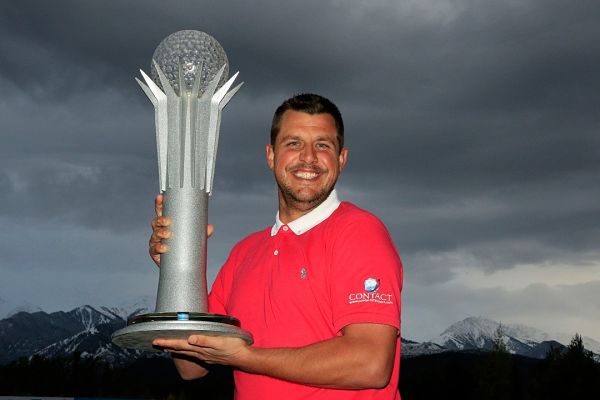 Sam Walker won his second European Challenge Tour title of the season as he claimed a one-stroke victory in torrential rain at the Kazakhstan Open at Zhailjau Golf Resort.

Walker carded a three under par round of 69 to finish one shot clear of overnight leader Jordan Smith, securing his second title in six events after winning the Vierumäki Finnish Challenge in August.

The Birmingham man finished with an 18 under par total after rounds of 69-67-65-69. Just 15 golfers finished their final rounds under par as bad weather made for tricky playing conditions.

He started the final round with a bogey on the first hole, just his second across the 55 holes he had previously played, but immediately recovered with a birdie on the second hole and a further gain on the fourth hole.

Two birdies on the eighth and ninth holes were followed by a bogey on the tenth hole, and his birdie on the par five 15th hole saw him draw level with Smith with just four holes to play.

Smith, who finished level par on the day, bogeyed the 16th hole and Walker parred his final four holes to secure the €72,000 first prize.

“It’s amazing,” an emotional Walker said. “To go through what I’ve been through over the last three months, working hard, trying to get my career back on the mend, to win in Kazakhstan just tops it all off. The biggest one of the year, and I’ve won it.

“It’s unbelievable. I said at the Rolex Trophy I just have to concentrate and try and finish in the top 15. If I didn’t do that, I said I’d be hanging my clubs up, throwing my shoes away and getting another job somewhere else.

“But it’s all paid off, the training, the help I’ve received from my wife and my trainer Darren is great.”

Victory in Almaty propels Walker up to second place in the Road to Oman Rankings, just less than 18,000 points behind Smith who returns to first place.

With just five events of the season left to play, Walker highlighted the importance of his fifth victory in his Challenge Tour career.

“Finishing at the top of the rankings has never been a goal. But finishing in the top 15, you’re guaranteed a lot of tournaments next season on the European Tour. It would be nice to go on and win again.

“It would nice to win the Order of Merit but I’m second now and a long way ahead of third. There are five more events to play and it would be nice if I could win again.”

Reinier Saxton finished in solo third place on 14 under par with Duncan Stewart, who carded a superb four under par in awful weather conditions, a low for the day, and Ryan Fox both a shot back on 13 under par.