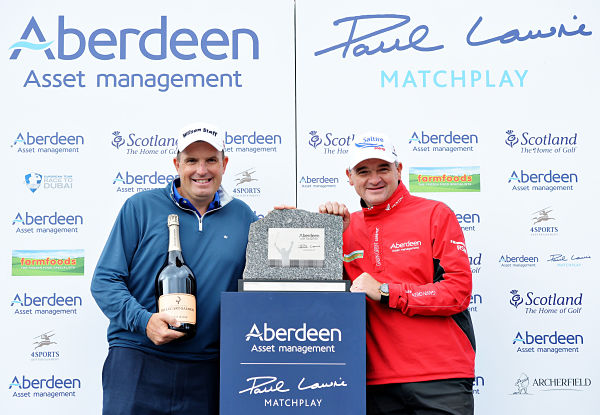 The Englishman’s wait between titles is the longest in European Tour history, while the 431 events since his first triumph in South Africa surpass the previous high of 276 set by Christy O’Connor Jnr.

Wall overcame a sluggish start at Archerfield and eventually secured a one-up win over favourite Noren, who missed out on a Scottish double following his victory at Castle Stuart last month.

Noren was a combined 19 under par for the front nine over the first five rounds and made another flying start in the final.

Wall drove into trees at the first and Noren took full advantage with a birdie from ten feet. It was Noren, a five-time European Tour winner, who was wayward off the second tee as he pulled his effort into a forest down the left.

However, having been forced to chip out backwards, he played a remarkable third to the green on the par five and sunk his putt for another birdie.

At two down Wall must have been expecting his long wait for a second trophy to continue, but he responded immediately with a winning birdie on the third and squared the contest with a gain at the long sixth as Noren paid for missing the fairway.

The 41 year old Wall cashed in again on the par five 11th to go one up with a birdie, and scrambled superbly from sand at the 12th and 14th to maintain his lead. Both players got up and down for birdie at the driveable 16th, and at the short 17th Noren saw his birdie effort lip out as Wall kept his nose in front.

Wall made par at the long finishing hole, leaving Noren an opportunity to force extra holes from 15 feet, but the Swede’s ball stayed above ground to seal an emotional victory for Wall.

England’s James Morrison won the third-place play-off 4 and 2 against compatriot Oliver Fisher after starting with a run of birdie, eagle, birdie to establish a lead he refused to relinquish.

Anthony Wall: “It’s funny – the other win in 2000 felt like yesterday! It’s amazing because it’s such a hard job to beat everyone because everyone is so good. It just feels amazing – I cannot tell you how happy I am.

“I did wonder whether it would ever come again. I’m just so pleased for my parents – they put in so much when I was young. I’ve got two children that just want to see their dad win, I’m speechless, it’s phenomenal.

“I don’t know what the difference was this week. I had been struggling a bit this year but you don’t know what you’re going to get in this game. It can turn around so quickly. I felt calm all week and I found something with my putting which obviously made a massive difference.”

Paul Lawrie: “It’s been an excellent event. The feedback again from the players, like it was last year, was that they love the format. They love the idea of a straight knockout. The venue couldn’t be any better for us. Delighted with how it’s kind of came across and how it’s played. The driving range, pitching green, chipping green, putting green, everything’s handy, everything’s nearby, all the offices are there, spectator village is a little better I think than it was last year.

This is only our second year, so we are learning, as well as everyone else is. But I think it’s been absolutely brilliant. We’ve got one more year on our contract with The European Tour, but we see don’t see this stopping or being a short-term thing. Obviously we have to sit down and debrief with everyone on how things have gone so we can learn on things again to hopefully progress further.”