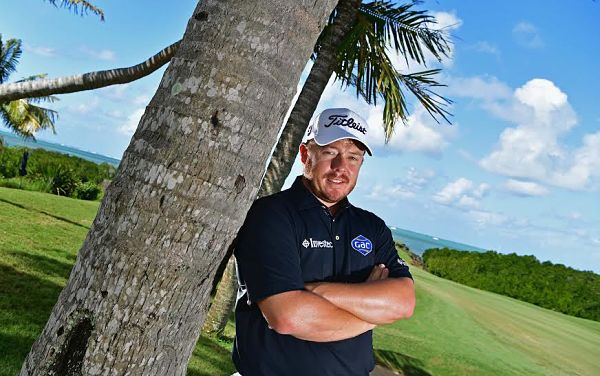 George Coetzee admitted he will be stepping into the unknown when he defends the AfrAsia Bank Mauritius Open title, having not played a competitive round for six weeks.

The South African claimed his second title of the season on the paradise isle 12 months ago, but his progress was abruptly halted when he broke his left ankle while surfing in September, keeping him out of action for the rest of the year.

His return in 2016 was promising, making six cuts from seven European Tour events and winning a Sunshine Tour tournament, but after the WGC-Cadillac Championship in March he decided to take another extended break to continue his rehab and – undeterred by the accident – partake in water sports.

The AfrAsia Bank Mauritius Open – in its second year and tri-sanctioned by the European, Asian and Sunshine Tours – moves to the stunning Four Seasons Golf Club at Anahita this year, and anyone wanting tips on how to play the Ernie Els-designed course should speak to Belgian Nicolas Colsaerts, who has been the touring professional here since 2010.

With strong winds forecast, Colsaerts’ prodigious length will be an advantage, while big-hitting Australian Scott Hend will also benefit on this course. South African Jaco Van Zyl is chasing an elusive European Tour win, having racked up nine top three finishes in the last five years.

“I don’t know how my game will be. It’s been six weeks since my last event, so it’s been a while since I’ve been tested. There’s definitely some rust to work off before the tournament starts. The last six weeks have been fun. I went surfing the first couple of weeks and broke a couple of boards – luckily no ankles! Then I went fishing last week and had a great time with (Richard) Sterne and (Charl) Schwartzel and another couple of mates in the Seychelles. It was great to be out there doing other stuff and not talking only about golf.

“It’s probably going to be another couple of months before the ankle is pain-free. It’s a slow process. I’ve been working hard on trusting it and committing to it when I swing.

“The key on this course is keeping the ball in play off the tee. The greens are quite small and tricky to hit, so I think if you can chip and putt well this week you’ll do well. I think we are all going to have a tough challenge on our hands this week. If the wind keeps blowing like this, I don’t think the winning score will be double figures under par. I think we’ll even do well to stay under par.”

“I came here in 2010 to play in the first edition of a pro-am event they have here every December and I’ve been coming back every year since. Sometimes in winter I spend two or three weeks here, so I know everyone from the guy who picks up the balls on the range to the guy serving the water and ice creams on the beach at the hotel. It’s like a second home.

“They’ve re-shaped the fairways, so the course is bit different from what I’m used to, and it’s going to be a great test for us. There are a few holes where the longer hitters can take advantage – you can fly a couple of bunkers. I can reach all the par fives in two, but maybe not the second this week because of the wind being right in your face. The holes into the wind will be pretty difficult actually. It will have a bit of a links feel to it.”

“It’s a great golf course and I’m very excited. There are worse places in the world to be! I’ve been doing a lot of work on my short game these last couple of weeks that I’ve had off. That isn’t really like me – normally when I take a break I take a break. So I’m just really excited to test it out and get in the swing of things. My season starts here this week. There are a couple of majors coming up and hopefully the Olympics. I’m playing three events in a row starting this week, so after a very slow start to the year I’m hoping to get going now. I enjoy playing in the wind. You need to create shots and work the golf ball a little bit, so it’s not too technical. If the wind keeps blowing like this it’s going to be a great test.”

Horschel claims Rolex Series glory at WentworthNews
23 September, 2021
Billy Horschel made a stunning closing birdie to fulfil one of his great golfing ambitions and win his first Rolex Series title at the 2021 BMW PGA Championship. The American watched the event on…
Countdown begins to 2023 Solheim Cup at Finca CortesinNews
23 September, 2021
The countdown is underway to Finca Cortesin hosting the biggest team competition in women’s golf, with all roads pointing to Spain for the 2023 Solheim Cup. The most talented players from…
Real Club Valderrama, a forge of championsNews
23 September, 2021
For almost 35 years, the European Tour and Real Club Valderrama have set up one of those successful pairings that empower and reinforce each other, and this association has yielded a notable list of…
Steve Stricker Completes U.S. Ryder Cup Roster for 43rd Ryder Cup with Six Captain’s PicksNews
23 September, 2021
United States Ryder Cup Captain Steve Stricker today announced that Daniel Berger, Harris English, Tony Finau, Xander Schauffele, Scottie Scheffler and Jordan Spieth have been added to the U.S. Team…