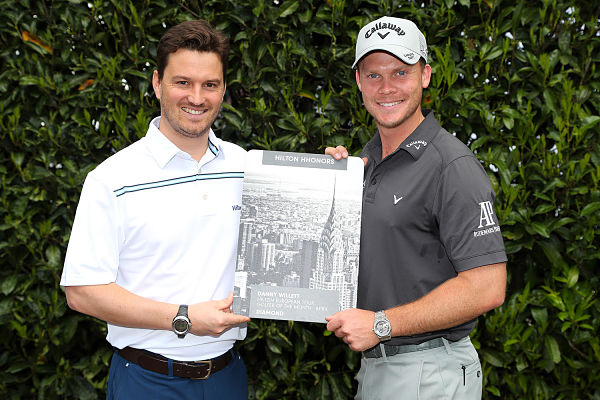 Danny Willett has been named the Hilton European Tour Golfer of the Month for April in recognition of his stunning victory in the Masters Tournament.

It is the third Hilton Golfer of the Month award for Willett already in 2016, following his success in January as a winning member of the victorious EurAsia Cup team, and February for winning the Omega Dubai Desert Classic.

The 28 year old became the first Englishman for 20 years, and seventh European in history, to win at Augusta National when he strode to a two-stroke victory over Jordan Spieth and Lee Westwood in the season’s first major.

The triumph was the culmination of a wonderful 18 months for the Sheffield player, who notched two victories in 2015 – the Nedbank Golf Challenge and Omega European Masters – to push Rory McIlroy all the way in the Race to Dubai.

He came up just shy in second place, but continued to impress in 2016, winning in Dubai and taking third place in the WGC-Cadillac Championship before his brilliant performance to claim the Green Jacket a week after the birth of his son, Zachariah.

Willett will have another trophy to add to his cabinet after a panel of golf media unanimously voted him as the Hilton European Tour Golfer of the Month for April.

The winner of the monthly award usually receives an automatic upgrade to Diamond Status on HHonors, Hilton’s award-winning loyalty program. However, in recognition of his hat-trick this year and his extraordinary achievements, Willett receives a seven night stay at any Hilton hotel in the world, which was presented on Tuesday by Marcus Jansa, Hilton’s Director, Strategic Partnerships.

Willett said: “I’m delighted to win the Hilton European Tour Golfer of the Month award again. To win it once in a season is an honour, so to do it three times is very special.

“Obviously this one stands out a little more because it is for winning the Masters Tournament and my first Major Championship, so it is definitely an award which I will remember.”

Panel member Warren Humphries, the former European Tour winner and now golf commentator, said: “Danny’s performance over the back nine, especially playing the last four holes when he knew he had the chance to win the Masters, was outstanding.

“His coolness and confidence were incredible and the chip he played on the 17th was just brilliant. Without a doubt, he is the deserving winner of this award, and his play overall in the last 18 months has also been exemplary.”

Dom Boulet, also a player-turned-commentator, added: “I thought Andrew Johnston was also brilliant down the stretch in Spain – much like Willett – on a really difficult golf course where everyone was struggling.

“He played those last three holes brilliantly – it was very composed for a player going for his first win. He handled himself so well. Soomin Lee also produced a terrific performance, particularly as he had a three-shot lead in Malaysia with three holes to go before missing out. To have the confidence to come back again showed he is definitely a player who is going to be around for some time.”

Honourable mentions were also given to Branden Grace, who claimed his first title on the US PGA Tour at the RBC Heritage, and Joost Luiten, who had two runner-up finishes in April at the Open de España and the Shenzhen International.

EAGL, world’s first franchise-based amateur golf league, promises to be a game-changer for players and sponsors in the UAENews
21 January, 2021
Emirates Amateur Golf League (EAGL), a first-of-its-kind franchise-owned amateur league tournament in the world, has been launched in the UAE. Conceptualized by Mr Sudesh Aggarwal, a prominent…
McIlroy aiming to get the job done in Abu DhabiNews
21 January, 2021
Four-time Major Champion Rory McIlroy hopes to continue his strong run of form at the Abu Dhabi HSBC Championship as he starts his 2021 season at the first Rolex Series event of the year. In ten…
Golf’s way to international popularityNews
21 January, 2021
It is difficult to say exactly when the sport golf originated, but it is most likely to have been invented in Scotland around the 15th century. Since then, the sport has dealt with a broad…
International Ryder Cup stars descend on Abu DhabiNews
21 January, 2021
European Ryder Cup Captain Pádraig Harrington has confirmed his participation in the Abu Dhabi HSBC Championship, the first Rolex Series event of the 2021 Race to Dubai season, when international…