Tengolf
GLOBALAMÉRICA
Inicio And I looked in the bag and all I saw were thirteen...
Compartir 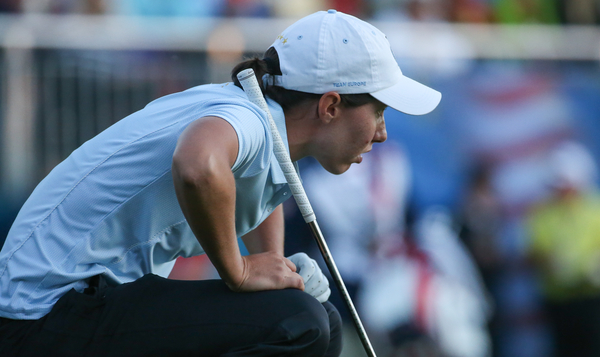 Inbee Park is not forgiving. What can I tell you that you don’t already know. What a week in Mexico and what a day on Sunday. The vibes on the course were good, since day one. Incredible tournament, although unfortunately I just couldn’t win. Why? I sincerely believe that against another golfer I would have been able to win, but against Inbee…

Sunday I went out convinced that I could hit the ground running. I was playing well, I was comfortable and I tried every way I could. I started off strong, with an eagle and a few birdies, but Inbee didn’t budge. It doesn’t matter if it’s five birdies in a row or five bogeys (she never does). She always puts on the same face, the same gestures, the same serenity. Sunday was a great example of the type of player she is. I was playing very well, but she goes out, and makes eight below par and that’s it.

I want to thank Lorena Ochoa for the tournament, and the sponsors and all the fans that went to the course to cheer on the golfers. It was an incredible atmosphere. We were all at ease. The people are amazing, very pleasant and polite. And on top of that, my parents were there, so the week was complete. It’s always nice to have the people who support you close, and to feel their warmth and good energy. It helps me.

The tournament was marked by what happened on Sunday, but there were two stories throughout the week that I have to tell you about. One explains very well how the game of golf really is, and the other is just so you can see that, sometimes, the life of a golfer off the course can also be very interesting.

My arrival to Mexico is definitely worth mentioning. I didn’t know what kind of face I made when I opened the bag with clubs in it, but I can only imagine. I started counting and there were only thirteen. And I thought no, no way. I counted again. And again. And again they weren’t there. And again there were thirteen…Indeed, I left the pitching wedge in Pamplona. A big slip-up, but there is an explanation. When I’m at home, I often grab the pitching wedge and I shoot a few balls in the back yard. I did it the day before traveling and I left the club propped up against the wall…where it is definitely still standing. The first thing I did when I got to the course in Mexico was ask for a pitching wedge, I didn’t care, whichever one they gave me, and they got me an old R7 with a very large head for an amateur with a handicap of 48. That’s what there was. So be it, I played with that club and I played well, for you to know how it went.

The other story happened on Saturday. We were late to our tee time. I know it’s unbelievable that that could happen, but it did. We left the hotel two hours and fifteen minutes before it was time to play. We went on the bus with Minjee Lee, Suzann Pettersen and Angela Stanford when we suddenly stumbled upon a huge traffic jam. I have never seen so many cars in one place as I did that day. Apparently it was a Mexican holiday which had started two days earlier and everyone was leaving to go on vacation. What a nightmare. We took more than two hours for a five kilometer drive. It was so stressful, although after it was all said and done, we were all able to laugh about it .The four of us were all in the top ten of the tournament. Can you imagine if they would have disqualified us? The LPGA understood perfectly and pushed back our tee times.

By the way, one last thing, in my last blog post I said that Javi Urquizu and I had parted ways, right, in Mexico Mark Wallington handled my bag, who is usually Melissa Reid’s caddie. I met him in the Solheim Cup, when we played together, and since she isn’t playing during these couple weeks, he went with me.

Donaldson remains ahead in DubaiNews
22 January, 2022
Jamie Donaldson signed for a three under 69 to maintain his one-shot lead and set the clubhouse target at 13 under par on a fog-delayed Friday at the Omega Dubai Desert Classic. The Welshman…
Masterful Garcia to join Westwood at British MastersNews
22 January, 2022
Masters Champion Sergio Garcia has confirmed he will join tournament host Lee Westwood at the British Masters supported by Sky Sports at Close House, in Northumberland, England, from September…