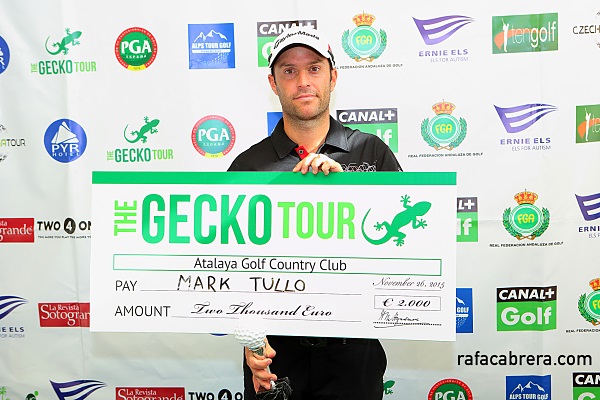 Mark Tullo opened his title account on The Gecko Tour with victory on Thursday in the fifth event of the season, held at the Atalaya Golf & Country Club and Río Real Golf & Hotel courses in Marbella. Tullo totalled 205 over the three days, finishing with a magnificent 67 in the final round played completely at Atalaya.

Tullo’s name is thus inscribed on a long list of top players who have enjoyed success on The Gecko Tour. Born in Chile 37 years ago, the Costa del Sol-based golfer can claim to have competed in nearly 100 European Tour events during his career so far. He is still seeking his first win but he has been close on several occasions – highlighted by a runner-up finish in the 2013 Madeira Islands Open and third place in the 2011 The Barclays Scottish Open. His progress on the Challenge Tour has been just as prolific and even more successful: he has made more than 100 appearances on the tour and won three times (Rolex Trophy and Egyptian Open in 2010, and 2014 VACON Open).

Tullo headed out on the final day as the overnight leader and consolidated his position with four birdies on the first 10 holes. He quickly gained an advantage of four shots, which seemed insurmountable for everyone except Noemí Jiménez. The doughty Andalucian golfer from Guadalmina fought for victory all the way to the final green, gritted her teeth and never gave up trying to hunt down and capture the birdies that would put the leader under pressure.

Her determination received its just reward. After carding a birdie on the 18th as Tullo bogeyed the 16th, she made sure it would be a tight battle to the finish. The Chilean teed off for the final two holes with a two-stroke lead – in control of the situation but by no means over-confident. Anything could have happened. In the end, he handled the pressure well, bouncing back with a birdie on the 17th, securing par on the 18th and eventually finishing with a three-stroke victory over second-placed Jiménez. “It was tough because I wasn’t familiar with the courses,” he said after being presented with the trophy, “but I played quite solidly today. Now I’m off for a holiday in Chile but I’ll be back in January and definitely play on The Gecko Tour. I really like this competition for forcing you to maintain your edge and instinct. It’s always good to play with a bit of pressure.”

Noemí was unable to gain a victory but she certainly left her mark on The Gecko Tour as a brilliant golfer, carding the best round of the final day at Atalaya (66). She has now played in two Gecko events and leaves with a fourth and second place finish. Excellent progress and a timely boost to her confidence as she prepares for next week’s US LPGA Tour Qualifying School. This is the final test for the premier women’s golf circuit, where she has the opportunity of competing against the world’s finest players – a destiny that seems engraved on her golf bag. “I’m the kind of player who fights to the end and goes for everything. I don’t tend to look at the leaderboard, and that helps me quite a lot,” she said after finishing her round.

Sweden’s Andreas Andersson finished third with a four-under total, and fourth place was shared by two Germans, Domink Pietzsch and Max Griesbeck (who is still an amateur), and the Spaniard Manuel Quirós. Yet another success for this season’s Gecko Tour, with nearly 100 players teeing up in the tournament. There was a cut on Wednesday, at one-over, and 23 players qualified to play the final round.

It is also worth highlighting the praise received by Atalaya and Río Real for the excellent condition of their courses this week. The players were particularly impressed by the firmness of the fairways at Río Real, as well as its greens – hard and fast like any European Tour venue.

The sixth leg of The Gecko Tour will be played next week at Finca Cortesín and San Roque Golf Club, from 30 November to 2 December.

Rodiles soars, Noemí shines and Johansen goes crazy
17 October, 2021
Carlos Rodiles has become the fourth different champion on this season’s Gecko Tour. The Málaga golfer completed a convincing win on Thursday at the Marbella Club Golf Resort course, after…
Donaldson remains ahead in DubaiNews
17 October, 2021
Jamie Donaldson signed for a three under 69 to maintain his one-shot lead and set the clubhouse target at 13 under par on a fog-delayed Friday at the Omega Dubai Desert Classic. The Welshman…
Masterful Garcia to join Westwood at British MastersNews
17 October, 2021
Masters Champion Sergio Garcia has confirmed he will join tournament host Lee Westwood at the British Masters supported by Sky Sports at Close House, in Northumberland, England, from September…