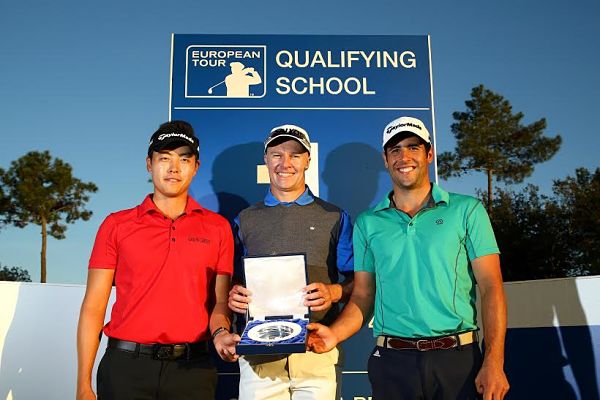 The unique and captivating nature of The European Tour’s Qualifying School Final Stage was encapsulated perfectly by a dramatic final day which produced three winners, tears by the bucketload and the emergence of some of golf’s most promising future stars.

Typically for the six-round marathon at the stunning, sun-kissed PGA Catalunya Resort, however, much of the drama unfolded further down the leaderboard where the cut fell at seven under par, with four players climbing inside the crucial top 25 and eight suffering the crushing fate of falling out the other way.

Among the 27 to have claimed their cards were former Ryder Cup hero Edoardo Molinari, who had to endure a long and tense wait before finishing right on the mark, as well as Swedish teenage sensation Marcus Kinhult and Irishman Paul Dunne – who led The Open Championship  as an amateur after the third round earlier this year.

The emotion of the occasion was palpable throughout the day and the final round produced some heart-warming and life-affirming moments, most notably for Englishman Matthew Southgate – who was diagnosed with testicular cancer in July of this year.

It was a topsy-turvy and frenetic day which was given a fittingly bizarre ending as three players were handed the trophy after all finishing on 18 under par, with the European Tour cards distributed on the countback.

For van den Berg, it was also an emotive moment as he made a return to the top tier of European golf for the first time since earning his card here in 2007, before quitting the game in his rookie season following the death of his father.

“It was a long, hard slog for a 40 year old today,” said the Johannesburg player, who carded a four under par final round 68. “I last did this Q-School in 2007 and I got through then, but I forgot how difficult it is.

“Unfortunately I missed a seven-footer on the last to win the event outright, but it’s not about winning. It’s more about getting your card and I did what I could to get round here this week. It’s a great achievement for me because I’ve had a couple of hard years and this means a lot.

“It’s great to have the first card but I’m just so chuffed to have gotten a card at all and to compete out there with the best players in the world. My family and my wife have given up a lot for this to have happened, and my mother too, so it means a lot.

“After I last got my card, I started 2008 very nicely but unfortunately my dad got pancreatic cancer so I decided to quit The European Tour after about eight events and sat with him until he passed away. I got a medical exemption in 2009 but I was a broken man that year. I haven’t been back since and this is my first time here since then so it’s a great moral victory for me.”

As emotions ran high on the final day, two of the coolest customers were also two of the youngest – Kinhult and Dunne – who both earned spots on The Race to Dubai for 2016.

“It means more to me now than St Andrews because I’ve got something out of it,” said 22 year old Dunne. “I played better at St Andrews but I was happy with how I grinded my way through this week and stayed patient and kept things together.

“It’s a great step because turning pro straight away, skipping the feeder tours to go straight to the main tour is something I always dreamed of doing and wanted to do, but you never know how long it’s going to take. I’m just happy to do it first time and hopefully never have to come back here!

“Ever since I started the year back in February in college, my number one goal for the year was to get through Q-School, so to achieve something I’ve been wanting to do and practising for all year is brilliant.”

Kinhult is another who caught the eye while still in amateur ranks, leading the Nordea Masters at the halfway point earlier this year, and the 19 year old believes he is now more than ready for life as a professional golfer.

“It feels unreal, unbelievable,” he said. “It’s been a long week, a couple of tough days these last three days and it was a bit of a struggle for me on the course but I managed to pull it off in the end.

“I felt prepared for professional golf already coming into this week but this is a good confirmation of that. My game is good enough to be up there with those bigger names hopefully in the future, that’s what I’m trying to reach of course.”

Molinari, the older of the famous Italian brothers who starred together in The 2010 Ryder Cup, compared his four under back nine to the one which earned him a second European Tour title at Gleneagles in 2010.

The 34 year old looked to be down and out after a double bogey at the 14th, having teed off at the tenth, but he rallied to an immediate birdie at the 15th before carding the tied best score of the day on the front nine, his back nine, to register a three under par 69 and finish on the cut line of seven under.

Kinhult and Dunne played together and both displayed maturity beyond their years – not for the first time in the professional ranks – to card level par 72s and claim the 16th and 17th European Tour cards, respectively.

The biggest movers on an enthralling day on northern Spain were Welshman Stuart Manley, whose six under par 66 was the best round of the day and earned the 13th card, and South African Justin Walters, who climbed from outside the cut line to claim the ninth card courtesy of a five under 67.

Nemecz looks good at Q School halfway pointNews
22 January, 2022
Lukas Nemecz retained the lead of The European Tour’s Qualifying School Final Stage but was joined at the top of the leaderboard on 14 under par by teenager Marcus Kinhult at the halfway point of…
Cullen nicks early Q School lead
22 January, 2022
Nick Cullen set the benchmark on the first day at The European Tour’s Qualifying School Final Stage, firing a nine under par opening round of 61 on the Tour Course at PGA Cataluyna Resort to…
Donaldson remains ahead in DubaiNews
22 January, 2022
Jamie Donaldson signed for a three under 69 to maintain his one-shot lead and set the clubhouse target at 13 under par on a fog-delayed Friday at the Omega Dubai Desert Classic. The Welshman…
Masterful Garcia to join Westwood at British MastersNews
22 January, 2022
Masters Champion Sergio Garcia has confirmed he will join tournament host Lee Westwood at the British Masters supported by Sky Sports at Close House, in Northumberland, England, from September…