Tengolf
GLOBALAMÉRICA
Inicio Blogs Jon Rahm Knowing that my name will always be there is an incredible honor...
Compartir 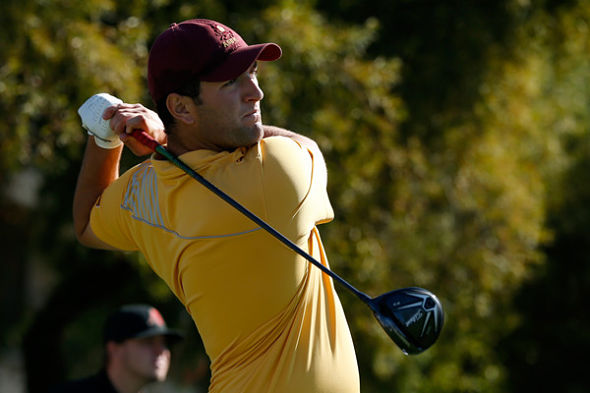 I think I’m still smiling after Sunday’s win. And because of what’s to come. Winning the finale of the Pacific Conference, known as the PAC 12, is one of the most important titles you can achieve in your academic career. It’s a very special tournament, which means having my name go down in the record book along with Tiger Woods, Phil Mickelson and Paul Casey, among others, and because I know it’s very important for my university. It’s an honor to know that Jon Rahm will always be there as well as Mickelson and Casey and that the students that go through Arizona State University will see it. Casey’s congratulations on Twitter surprised me and gave me goosebumps. We are talking about someone who won this tournament for three consecutive years. Thank you very much, Paul.

It was a very exciting tournament. I don’t think I’ve ever been so nervous as that almost one hour and a half I had to wait to find out whether or not I had won. It was an incredible Sunday. I started six shots from the leader and I ended up winning with a four-shot advantage, but of course we didn’t know anything at that point, so I had no idea what was going on. I didn’t know what to do, I couldn’t eat, I went to the ping pong room for a few, I came out and ended up going to the driving range to shoot a few balls at least and to release some tension…It was then that my coach confirmed by phone through a few ‘infiltrated agents’ that word on the course was that I had won. You can imagine how happy I was.

The tournament wasn’t easy, actually quite the opposite. The course (The Country Club in Salt Lake City) is tucked away in the mountains, next to some ski slopes, really pretty, yes, but it was very, very difficult to control the trajectory of the ball and the distances. Additionally, there was lots of wind, not a hurricane, but the next level up, so there were some crazy things happening. For example, on one hole I hit a 225-meter drive and a 120-meter 6 iron… You can imagine how the wind was blowing against us. To add even more insult to injury, the rough was similar to the US Open, with narrow fairways… Awful. I didn’t start the first round off well, but everything changed on the 8th hole, a par 5. I was 230 meters from the flag and I decided to hit a 4 iron to drop the ball on the edge of the green. However, from what I’m telling you about distances and wind, the ball ended up two meters away for eagle and I sank it in…

As you know I started the last round six shots from the leader, very far, however the forecast said that the wind would be blowing and the truth is that I rubbed my hands together and racked my brain. I knew that if I started the round off strong that I would have more options. And that’s how it went. I made four birdies on the first few holes, played some very, very good golf, and by the 9th I was already the leader, although of course I didn’t know that at the time, just when I had already finished. Precisely from not having known the scores, on the 9th I wasn’t too aggressive and I ended up with a bogey, I made a double bogey on the 10th and then I spoke with my coach. He told me to be patient and he set the goal at one more birdie before the 16th. I risked it on the 14th. It was possible to get really close to the green from the tee by risking it a little and it turned out well. I dropped the ball 80 meters away with a good approach and I sank it in. On the 15th I made a great par and on the 16th (very narrow fairway) I had the luck I needed to win. I missed the initial drive, but the ball was left in such a position that I already had one foot forward, thus I was able to drop without a penalty and it came out perfectly. On the 17th I made a par and on the 18th I shot a putt from two meters away for eagle. It didn’t go in but I made a birdie. 68 shots. Very pleased.

I think one of the keys to winning was the putter. I changed it two weeks ago. I started using a 37-inch one, two inches longer than the last, and I’m doing much better with it. I’ve felt really comfortable from the start because it allows me to keep my back straighter and my eyes on the ball, and thus I’m able to aim better. In fact, in my first three rounds with it I finished with a -5, -7 and -8, so I told myself: this putt works. Before I wasn’t confident with the putts from a meter and a half away and now I feel much better about it. In the tournament I made 26 birdies and an eagle, so there’s no better proof that it’s going well.

That’s how I’m going to prepare for the US Open and my absence in the Open de EspañaJon Rahm
28 September, 2021
Change of plans for the US Open. It's now been confirmed that I'll play as an amateur, through the invitation I received from the USGA after having finished the course as Number One in the world…
The story behind the crucial change in putt before the US OpenJon Rahm
28 September, 2021
Hi everyone, we’re in Scotland now. I have been really excited to start competing in Europe again. I haven’t done it since the Open de España in 2019. A lot of time has gone by since then, and…
I didn’t expect to get it so quicklyJon Rahm
28 September, 2021
When the tournament ended and they told me that I had secured the card, I couldn’t believe it. Are you sure? One hundred percent? Make sure they’re not Canadian dollars instead of American…
Oakmont, graduation and the Ben Hogan AwardJon Rahm
28 September, 2021
These last few days have been really intense. What a week. I almost don’t even know where to start. I’ll go in reverse chronological order, that way it’s easier. I’ll start with the last…