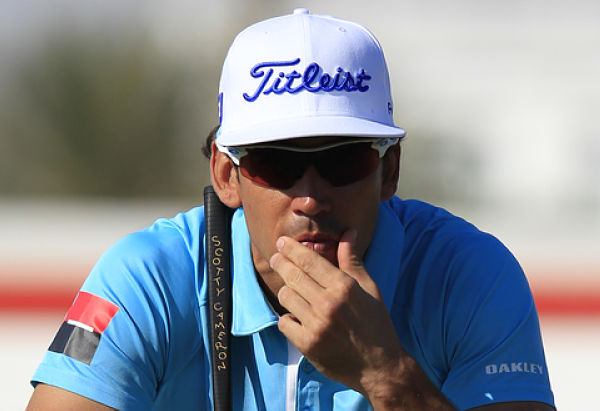 Hi everyone! I know it’s been awhile since I last wrote in this blog, but I hope it’s worth the wait. I wanted to share about my experience these past weeks with everyone once I knew that I had qualified for the Ryder Cup.

I’ll start from the beginning of the year. I would be lying if I told you that before going to Abu Dhabi to compete, my first tournament of the year, the Ryder was a clear and concrete goal. Of course it was a dream of mine, it always was, but from there to thinking about being a part of the team coming from approximately 115th place in the world rankings seemed like a long shot. Now I have to admit that after the ‘desert tour’  finishing in 14th, 2nd, and 2nd again, the excitement and the rush of being on the team took a hold of me. It only happened just a few weeks later, fortunately my game continued to be really solid, and after Dorsal, WGC Match Play, Houston and The Masters, the Ryder qualification went from being the long shot to the most imminent goal.

But there’s still so much left… Many weeks, many tournaments, some with extra Ryder points, even three majors, etc, etc, etc… In short, it still needs to come around full circle. And the questions start to come, interviews, almost daily: and the Ryder? How do you feel about your game? Do you think you can do it? You think you can keep up with the team? And more…

How could I manage that inevitable pressure that comes when you’re “on the team at the moment” Well I’d have to forget about the Ryder in some way, and continue playing the same way I’ve been playing all year. To learn not to think about it (an absolutely impossible thing to do I’ll admit). But I did figure out a trick. I trusted that I would qualify if I continued to play as well as I had been, so every time the Ryder came to mind on the course, I would tell myself that thinking about it wouldn’t make me play better, but that it would push me to bring out the best in my game in each and every shot I made. It all adds up for the Ryder. And that’s the attitude I took on the rest of the year with. Instead of ‘trying to qualify’, I changed it to ‘fight for every shot”. Focus on the task at hand, instead of the results. And I can proudly tell you now that it worked!

Getting closer to the date of the qualification, I think of tournaments like the French Open and the two majors after that. Those were three key tournaments. One that was a very exciting experience for me was without a doubt the French Open. It had extra points for the Ryder and that’s why it was a potential threat, because if things didn’t go well, a battle in which we were around 6-8 fighting for 3-4 spots, could have turned into a massacre of 10-12 going for 2-3 spots. However, at the same time, it was also an opportunity. I was ahead of most of them, and if I was the one that got the good score, everything would start shaping up quite well. And that’s what happened: my 4th place gave me another big push in the right direction, creating distance from everyone else. That big week together with making both cuts in the following two majors, practically secured my qualification. The unlucky shots that would have to happen in order for me not to qualify began to become highly improbable. Even so, I still had to continue cautiously, because if there’s one thing golf teaches us it’s that anything can happen up until the final moment.

The moment they told me I had technically qualified was the Sunday of the Wyndham Championship. It was during the interview with Nick Dougherty for the Sky channel after my round. I remember perfectly that in that moment an enormous smile broke out across my face, even after having finished that round with bogeys on the 16th and 17th holes that brought me down from from second to fifth place in the tournament. However, the incredible happiness still hadn’t fully sunk in. It’s probably that small frustration after the bitter finale that kept me from enjoying that day. I was at the airport, I was traveling alone. I was reading the paper that talked about the news, social media, phone full of calls and messages… I got goosebumps and even started to tear up. I was excited. I felt immensely satisfied and proud. I had been dreaming about playing one day in the Ryder all my life; another Spanish golfer who would defend Europe in one of the most widely-followed sports in the world; to be on that 1st hole tee that so many people talk about and to feel what my idols Seve and Txema have felt, my friends Sergio, Miguel and Nacho… I was finally going to experience it! To know that all that hard work and devotion throughout all those years was going to turn into an unforgettable experience. To be there with my family, my partner and coaches who have helped me out so much in reaching my goal. I felt so honored and fortunate that day.

Even now writing this blog post several weeks later I still go back to feeling those same sensations. They were fantastic weeks for me. I was able to enjoy them while training and preparing for the Ryder at the same time. Three weeks without competing after the Wyndham before the Open in Italy, and now free before the Ryder as well. But let’s not get it confused, free doesn’t mean not training, I’ve been preparing for what will surely be the most intense week of my entire career. I set up my schedule these past months in order to arrive in the best shape possible, technically as well as mentally and physically. Putting in my part to help Europe win again. It’s a dream come true, and things always turn out well in my dreams. So I’m sure it will be an unforgettable week!

On dreams and ambitionsRafa Cabrera Bello
23 July, 2021
A positive assessment after the Gulf Swing. It couldn’t have been any other way. It’s true that when you’re that close to coming out on top, the sensation sticks with you of not having been…
The Open helps, but it doesn’t completely wash away the bad taste in my mouth…Rafa Cabrera Bello
23 July, 2021
I’ve finally been able to get rid of that thorn in my side from not being able to play in the British Open in Saint Andrews, which I’ve had stuck there since longer than you can imagine. It all…
Maybe it's time to stop searching and searchingRafa Cabrera Bello
23 July, 2021
After the traumatic finale at the Final in Dubai last year, I really wanted to do well at the Desert Classic, but at the same time, today I've realized that, precisely because of that finale, I was…
If not at thirty, then maybe at forty like Miguel…Rafa Cabrera Bello
23 July, 2021
I´ve just finished the BMW PGA Championship with a round of one under par. I am happy. Today I played better than yesterday, especially on the back nine, but after my start, obviously I would…

The latest ...
Rahm in the hunt as Fitzpatrick and Detry lead in Scotland
News
10 July, 2021
The story behind the crucial change in putt before the US Open
Jon Rahm
9 July, 2021
Up to 32,000 fans to attend on each Championship day
News
19 June, 2021
Rahm and Thomas set to star in Scottish showpiece
News
10 June, 2021
Magical Malchirand wins Ladies Italian Open
News
30 May, 2021