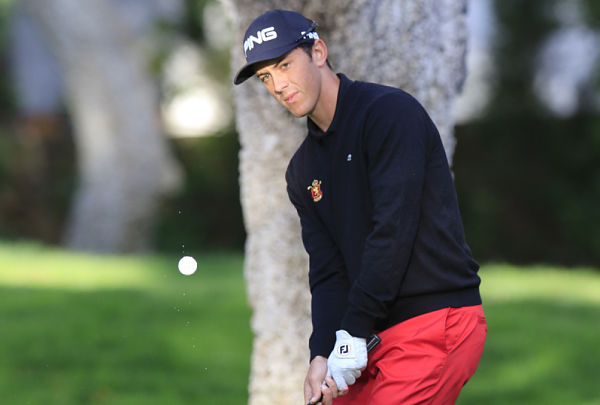 It’s nice to be home after five consecutive weeks of competition. It’s a lot of flights, travel, luggage, bags of clubs, a car, a bus, practice rounds, the tournament, training, suspensions due to rain, picking up where we left off, paperwork…You know, all those things that add up to: Welcome to professional golf.

The start of the season has been intense, interesting and enlightening. I’ve learned a lot, and not just on the golf course, but also, either in practice, also of course, watching and observing, talking to different people, or getting to know each person’s approach to the game. I’m in the midst of the learning stage, gaining more and more experience every week, and I like to listen to what people have to say in order to come to my own conclusions. Every little bit helps, but everyone should assimilate the information in a way that adapts to their own style and perspective, and what works best for them.

I’ve seen, for example, that playing five weeks in a row is a lot, although I don’t see it as a general rule. I think I had to do it. I just made it here and I really wanted to play and learn. I wanted to let it all soak in, and the best way to do that is to play. Little by little I’ll adapt my schedule according to what will help me get ahead, although I would say that these past five weeks didn’t burn me out too much. It’s true that I was excited to go back home, but I felt good on the course and solid proof of that was the tenth place in Italy, my best results yet.

In these past weeks, for example, I learned how important it is to disconnect during the tournaments. It’s impossible, apart from exhausting, to concentrate 24 hours a day thinking about golf. The key is to take a breather, talk about other things, do some sight seeing, to switch gears. Of course it’s necessary to train, do practice rounds and to play at one hundred percent, but after that, it’s essential to leave it on the course and to try to get ready for the next day or the next tournament, fresh with the batteries fully charged. I don’t think I’m too bad at that. Another idea I contemplated quite a bit during the first few tournaments was the necessity of having a caddie. I think I’ll decide on that according to the course. If we play in Scotland, England or Wales, in other words, in a place where it usually rains a lot, or on a course with lots of uneven ground, then yes, otherwise I like to how I do things on my own. I’m used to it and if it’s hot and the course is flat, it’s not a problem for me take a golf cart.

As far as pure and simple golf, what I was most happy with in those first few weeks was my game around the green. Let’s just say it was the area that generated the most doubts for me and the truth is that since Valderrama I’ve noticed a significant improvement. And what happened in Valderrama? It’s not easy to explain. It was a feeling, something I noticed that just clicked in my head. As you will all remember, the week of the Open de España was very tough. There were very few greens caught, so there were a lot of recovery shots, with a hard rough and fast and firm greens. Some were really good and I reached the conclusion that on one of the courses where the most difficult part is to recover, with a hard rough and fast, firm greens, I was able to do it, some of which I actually surprised myself with, so there’s no reason to be insecure in other situations. Now, every time I have a recovery shot that is a bit more complicated, I think of Valderrama. It’s sort of like a routine. The stats have improved quite a bit. For example, from the bunker I’m above 70 percent in recoveries, stats that I couldn’t achieve before.

As far as my schedule, there’s not much more to tell at the moment. This week I’m off, then I’ll play in the Czech Republic and in Switzerland, and after that we’ll see. Like I said in the beginning, I’ll make decisions based on how I’m feeling, physically and with my game. I’m happy with my performance in the start of this season, I think I’ve had a lot of low rounds and I’ve shown that I’m capable of birdies, which is important. The next step will be to cut down on shots where I can, which quite possibly could have allowed me to reach top 5 or top 3 in Italy. They’re things I should start learning.

"The first time that someone breaks your heart is when it hurts the most"News
27 February, 2021
Posted on November 2009 (after Volvo World Match Play Finca Cortesin)   Sergio García sat last week with TENGOLF for the following interview. To mix it a little, and after many…
"Hopefully I’ll make the team and I can’t wait for the Ryder"News
27 February, 2021
Posted on November 09 Rory McIlroy (Holywood, Northern Ireland, 1989), young prodigy of the European golf and future Major winner according to many experts, leads the majestic Race to Dubai…
Mark Wilson: "Garcia’s swing is one of the most beautiful things I’ve ever seen"News
27 February, 2021
The Mayakoba Classic, only regular PGA Tour tournament played outside the United States, is around the corner and Ten-Golf interviewed its champion, the American Mark Wilson. Wilson belongs to the…
"I'd love play a round with Ben Hogan in St. Andrews"News
27 February, 2021
Luke Donald talked to Ten-Golf on Wednesday, the day before of Madrid Masters’s first round. The Englishman speaks about golf, only golf, well, and little bit about paintings...