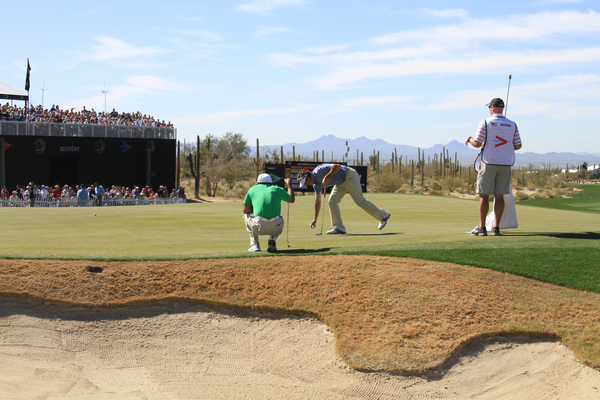 Tiger Woods is turning forty on December 30th and, basically, I’d say we should kiss the ground he walks on. If now all of us professional golfers play for the incredible sums of money we play for, it’s thanks to him. First, Arnold Palmer did it when golf was starting to be broadcasted in color on tv, and after, Tiger was his equivalent, only in the twenty first century. Thus, we have to be extremely grateful.

It seems as though he’s reaching the end of his career together with Phil Mickelson, but in any case, the future of professional golf is safe with Jordan Spieth, Rory McIIroy, Jason Day and Rickie Fowler. This means neither the game of golf itself, the PGA Tour nor the tv audience will be affected. The truth is that there was a lot of fear about what would happen if Tiger left, but now we can rest easy knowing that golf will be left in good hands with his predecessors.

It is true, however, that the viewers go up when Tiger plays and that’s why, among other things, although he’ll be turning 40, we all want him to come back. I honestly think it’ll be complicated because of his injuries. I wish he would come back to win again, I wish he would win majors and tournaments, but I think his dominance over the rest of the golfers is now history, not only because his game isn’t at the same level, but also because all these young golfers who have won in Tiger’s absence have started to loose the intimidation factor and the respect they had for the old generation like Els, Vijay or Mickelson. For golf’s sake, it would be amazing if he came back.

I’ve had the opportunity to play with him on four or five occasions if I remember correctly, and his game is a total show, the fans that stand by him, it’s an experience that I will definitely proudly tell my children and my grandchildren about: having played with Tiger and even having beat him on a few occasions. That is not forgotten so easily.

If old Earl were still alive…Blogs
23 September, 2021
If Earl Woods wouldn’t have died on May 3rd, 2006, everything may have been different. It could have given the image of Tiger turning 40 on December 30th a different angle. Imagine: a big cake,…
You have to tell me how you did that…Blogs
23 September, 2021
Now that Tiger is going to turn forty, a significant milestone no doubt, I want to relive one of the few stories I was able to experience with the golf legend. We have go back to the PGA in 2009,…
That black ribbon in remembrance of Miguel Ángel BlancoBlogs
23 September, 2021
The first time I saw him in person was in July of 1997. Tiger was accesible. Tom Kite, captain of the US team in the Ryder Cup, came with a few golfers to practice in Valderrama the weekend before…
The story behind the crucial change in putt before the US OpenJon Rahm
23 September, 2021
Hi everyone, we’re in Scotland now. I have been really excited to start competing in Europe again. I haven’t done it since the Open de España in 2019. A lot of time has gone by since then, and…