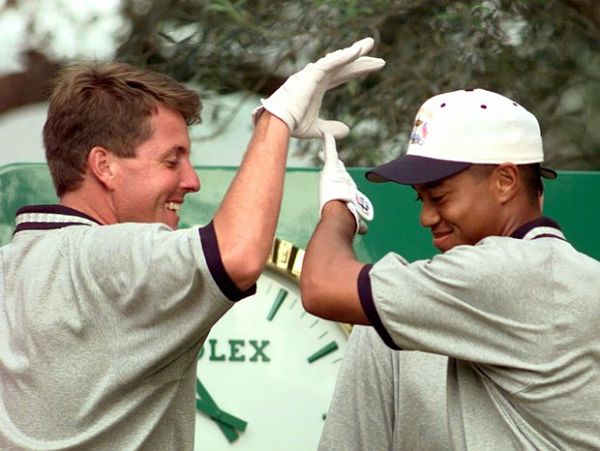 The first time I saw him in person was in July of 1997. Tiger was accesible. Tom Kite, captain of the US team in the Ryder Cup, came with a few golfers to practice in Valderrama the weekend before the British Open. Some months before, with the intention of levelling out the surface to gain the trust of the opposers, I took Kite and his wife for tapas in the ‘Madrid of the Austrians’, old town, knowing that the plan would not fall through: that first encounter and, later throughout the Ryder Cup, everything was made easy in terms of demands from the press.

That warm July weekend was painful for Spain due to the kidnapping and execution of  young Basque councilman, Miguel Ángel Blanco. Our country went through a dramatic experience that will never be forgotten; the Spanish society, deeply shocked and shaken, turned to the streets in the masses, protests imploring, first his freedom and, later on, mourning his loss. That Sunday black ribbons were passed around among all those who were in Valderrama; we told Tom Kite what had happened, asking that his teammates also wore the ribbons as a sign of respect, and they did, Tiger being the first.

I saw him again throughout the Ryder Cup. Tiger continued to be accessible. The days before the competition, the golfers appeared in twos before the one thousand four hundred accredited journalists present. Woods made his appearance at the Press Center together with his good friend and supporter, Mark O’Meara. Just before that there was Fred Couples, who gave me a folded up sheet of paper to give to Tiger. When I unfolded it, out of the corner of my eye, I was able to make out the message by jokester Couples: “I’m the blonde that has been watching you all morning. In one hour I’ll be waiting for you next to the driving range”. Tiger folded it back up and put it in his pocket and broke out into a wide grin.

I saw him for the third time in November of ‘99 when he came to Valderrama to play in the WGC-American Express. Tiger was no longer accessible. To my surprise, he had transformed into an inexpressive and calculated superstar…he no longer smiled. He arrived surrounded by six bodyguards, surrounded by coaches and psychologists, surrounded by assistants, surrounded…but at the same time he was alone and closed off in his own world. The managers and volunteers of the Press Center strictly prohibited us to get close to him and to ask him for autographs. I felt sorry for him. He was 23 years old.

I’ve met golfers who have become famous and successful too early on (nobody can be prepared for that), who were not able to experience life like other kids of their age do throughout their youth and adolescence, who did not have their own lives because they were controlled by others, first by their parents and later by acolytes…When you don’t move up in the world step by step, you don’t get to experience life’s many different chapters as others do and you are not in control of your own life, sooner or later it takes a toll on you. And Tiger’s hit was too hard.

The grand champion’s certainty among a sea of doubtsBlogs
17 October, 2021
Tiger will be turning 40 on December 30th. The grand champion is more sure than  ever on the one hand and, on the other hand, this vital pause has caught him swimming through a sea of doubts.…
The story behind the crucial change in putt before the US OpenJon Rahm
17 October, 2021
Hi everyone, we’re in Scotland now. I have been really excited to start competing in Europe again. I haven’t done it since the Open de España in 2019. A lot of time has gone by since then, and…
Seven exercises to active and getting glutes of steelBelén Mozo
17 October, 2021
Hi there! I am back this week with a fun at-home workout program for those of you interested in getting glutes of steel! (Which should be EVERYONE). I understand not everyone has the time to go…
My golf warm up routineBelén Mozo
17 October, 2021
WellPutt putting templateBelén Mozo
17 October, 2021
DISCOUNT! --MY FRIENDS AT WELLPUTT GAVE ME A 15% DISCOUNT CODE THAT YOU GUYS CAN USE AS MUCH AS YOU WANT TO PURCHASE YOUR WELLSTROKE. SHIPPING ALMOST WORLDWIDE WITHIN (48-72 HOURS)! IF YOU ASK ME,…
Did I hit a good shot?Belén Mozo
17 October, 2021
I have had this tendency lately of starting a tournament playing really well and not being able to finish it up in the weekends. Granted my last 3 events in a row was not the case, but yet I find it…
Didn´t win the trophy but won something bigger in returnBelén Mozo
17 October, 2021
Today I wanted to talk about my eventful week in New Zealand. But since this is just a golf category post, I am strictly covering the mental aspects of my competitive experience. New Zealand was…
Bay Hill, Disney World and Spring BreakThe East Wing of the PGA Tour
17 October, 2021
Hi everyone! I'm already back home after some really fun-filled (and tiring!) days in Orlando. We rented a house for the week of the Bay Hill tournament because it was a family affair with the…
This season’s calendar based on the Challenge TourÁlvaro Quirós
17 October, 2021
End of the 2016 season and I’m already in South Africa starting off 2017, where I’ll play by invitation. Well, let me clarify: I’m actually still not in South Africa, but in Zurich, waiting on…
'Opendicitis' to finish off the yearAzahara Muñoz
17 October, 2021
The year came to an end with an unexpected visit to the hospital. It all started on Wednesday of last week. Suddenly, I woke up that night with a sharp pain in my stomach. Strange. I had never…