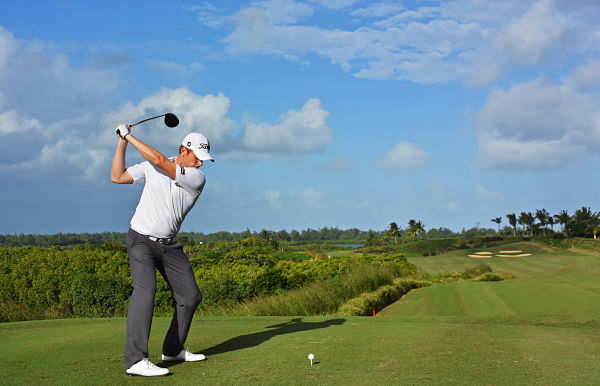 Australian Andrew Dodt extended his advantage at the AfrAsia Bank Mauritius Open with a steady two under par 70 on another exceptionally windy day at Four Seasons Golf Club Anahita.

The 30 year old once again tamed the gales on the stunning island’s east coast to move to eight under par at the halfway stage, three shots clear of Jeunghun Wang, who won his first European Tour title last week in Morocco, and Bangladeshi Siddikur Rahman.

On a day when only ten players posted under par rounds, the 65 from Nicolas Colsaerts defied belief, moving the Belgian up 68 places to a share of third spot on four under par.

The 2012 Ryder Cup player had nine birdies and two bogeys at the course to which he is attached, and afterwards described it as one of the best displays of his career.

England’s Ross McGowan also impressed with a 67 to jump to fifth place on two under, while defending champion George Coetzee of South Africa signed for a 74 to drop down to tied 16th on one over par.

Andrew Dodt
“I’m trying to embrace the challenge and enjoy the conditions and have fun, rather than trying to hold on and be defensive. You’ve got to be as tough as you can and miss in the right spots. I didn’t strike the ball as well as I did yesterday, but I missed in the right areas, where I could still get up and down. That was the key.

“The chip-in on 12th was a lovely shot. It came out a little harder than I would’ve liked but luckily it hit the hole dead centre. I lost my concentration on the next hole, though, which sometimes happens when you make a birdie.

“I’ve actually been struggling a bit to get on my left side through the ball, but this wind is helping me get on the left side, as you have to do that to hit it low. I’ve always been a pretty good wind player, so I feel really comfortable in these conditions.”

Nicolas Colsaerts
“I can’t really think of a better display than that. I played every shot the way I intended, using the wind here and there, and most of them were really close. I converted most of the birdie chances I gave myself, but it could’ve been even better. I drove just off the back of the green on the ninth and made four, and I three-putted the tenth. I dropped another shot on the 17th and got it back on the last, so overall I’m very happy. It’s the toughest I’ve ever seen this place play in however many rounds I’ve played here. It’s a serious test.

“I got on a roll on the front nine – I even made a two at the eighth, which is not usually a hole you’re looking to birdie. It’s very difficult playing these conditions on this grass – the ball can shoot off and it’s very difficult to control the trajectory well. And the greens are not very big, so all of that together makes it very tricky.

“It was nice to have plenty of support out there. All day I saw people I know – from staff to people who live here. And it was a nice reception coming down the last.”

Jeunghun Wang
“The wind was blowing really hard today and the rain made it even tougher. I’m pleased with where I stand right now but there’s still a long way to go. I had a great eagle on 13 and that was the turning point for my round. I hit a good second shot but it went into the bunker. I managed to chip it in from about 20 yards with a sand wedge. Then on the next I birdied from two feet. I want to stay consistent. I think it’s possible to win again this week. Two wins in a row would be amazing.”

Siddikur Rahman
“The winds were stronger today compared to yesterday. Overall, it was a good round for me. I hung in there and stayed patient. It was really tough so I am very happy with how I played. You have to think positively playing in these kind of challenging conditions. I am very happy with my driver. It’s been perfect so far this week.

“It would be great if I can get into the Olympics but I don’t want to think about it just yet. I don’t want to give myself any expectations. I just want to focus on every round and every shot and just keep playing well.”